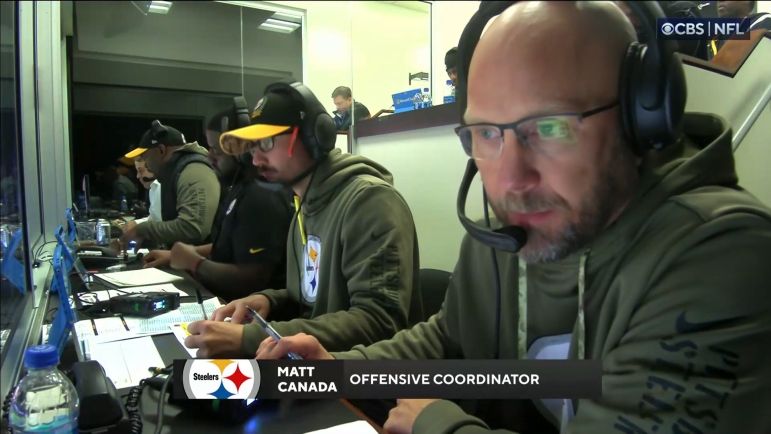 If the close to the 2022 season for the Pittsburgh Steelers — especially offensively — showed anything, the black and gold might not be that far away from competing with Kenny Pickett at quarterback.

Going 7-2 down the stretch, having one of the top rushing attacks in football and possessing a quarterback who made the clutch plays consistently, the ingredients are there for the Steelers moving forward offensively to be a real, true contender.

They just need a new chef to cook up those ingredients, according to Pro Football Focus’ Brad Spielberger. Appearing on the Fan Morning Show Tuesday on 93.7 The Fan, Spielberger said that the Steelers aren’t far off from being a true contender in the AFC with Pickett under center. They just need to upgrade the offensive coordinator position and move on from second-year coordinator Matt Canada.

It’s a common take, but one that is becoming more and more prominent as the Steelers move further into the offseason.

“I don’t think that they’re that far away,” Spielberger told Fan Morning Show hosts Colin Dunlap, Dorin Dickerson, Chris Mack and Adam Crowley Tuesday, according to audio via 93.7 The Fan. “They had another great finish to the season, another winning record and all of those things. But, Kenny really settled in. I mentioned I was a Kenny guy weeks ago on the show. I continue to watch him and I think things are slowing down for him, and the game is just becoming a little more simplified for him.

“I think they might be an offensive coordinator away, but that looks like that isn’t going to change, but that’s a whole different conversation. I don’t think they’re that far away.”

The enigma that is Matt Canada remains the hot button topic early in the offseason for the Steelers. Canada has largely underachieved in Pittsburgh in his first two seasons and really struggled in 2022 before the Week 9 bye week, eventually turning things around.

While the offense looked a lot better in the second half of the season, possessing a top 10 rushing attack, the Steelers still struggled to push the football down the field, and really came up short in the red zone overall.

As of now, it doesn’t appear that a change is going to be made on the offensive side of the football with Canada. That shouldn’t come as a surprise as Canada reportedly still has another year on his contract after being elevated to offensive coordinator in 2021, and the offense showed signs of real progress in the second half of the season.

Kenny Pickett and running back Najee Harris have already stated their public support of Canada as well, which could make things even more difficult for head coach Mike Tomlin, were he to make the move to part with Canada.

It might not be the popular take or the popular choice, but retaining Canada for the final year of his deal and letting Pickett enter the 2023 season as the starter and getting a jump on his second season in the same scheme with the same voice at OC isn’t a bad idea overall. If things don’t go well in 2023, then you make the move when Pickett is more of a veteran overall and the offense isn’t as young as it is now while trying to learn its way in the NFL on the fly.