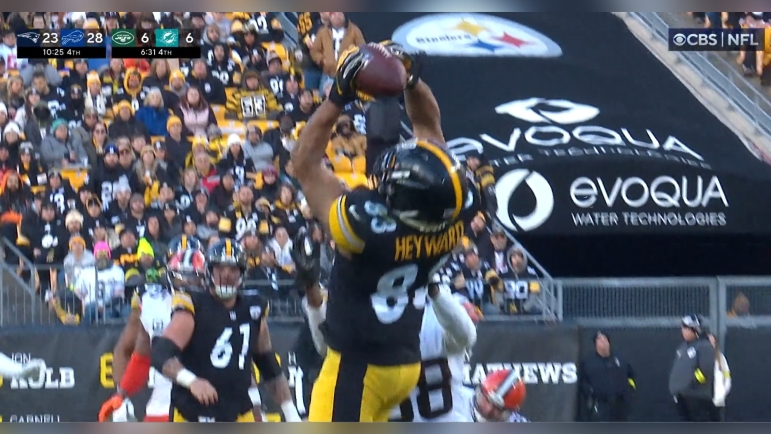 Finishing on a win is a good thing and Pickett finishing with seven wins in 12 starts is not too shabby. In this game, Pickett did a lot of work outside the pocket by bootleg, rollout or due to pressure. He kept his head up well to find receivers on the move.

From the pocket he had some struggles. He has a habit of drifting left in the pocket and did that often. His accuracy was off on several throws during the game. For example, he threw two balls over the middle that were not good decisions and could have gotten the receivers blown up. There were two throws where he dropped his elbow and the ball sailed on him. Two other throws were deflected at the line of scrimmage.

He took a delay of game penalty and also got away with another penalty. Cleveland threw a blitz at him and he threw the ball out of bounds from the pocket with a free rusher coming at him. There wasn’t a receiver within 15 yards of the ball. It should have been an intentional grounding that could have took them out of field goal range.

As expected from all of these rookies, there is plenty of room to grow. Working on ball placement, processing the coverage and working on his pocket footwork would be at the top of the list for me.

Pickens finished up his rookie season leading the team in receiving yards in the finale as well as catching a touchdown. He made a couple impressive catches along with one of the easiest he will ever have.

As far as the route tree, the majority again was on the deeper portion of the field. By my count, 16 of his 27 routes were of the deep variety. Other routes run at least twice were the deep Curl, Dig and Slant.

The first target was on a Dig route that was well overthrown. The second target was the touchdown reception. He ran a skinny Post with a free release and blown coverage for the easiest of TD’s. The next two targets were back-to-back back shoulder throws on the left sideline. On both he showed great body control and late hands to make a play on the ball. The former was a reception and the latter he couldn’t get his feet in bounds.

The final reception came on another back shoulder throw, this time on the right side. He was probably interfered with and falling backward but made a very difficult catch. The last target came on a slant in the red zone that drew a flag.

Pickens has impressive ability. The first focus next season should be to diversify his route tree more to include fewer straight runs down the field. Secondly, how to the get him the ball more? His receptions should take a big jump in 2023.

Leal finished with double digit defensive snaps in eight of his 11 games. In this game, 11 of his snaps were against the pass and 4 against the run.

The majority of Leal’s snaps came inside at the defensive tackle positon at various alignments along the line. As a pass rusher he didn’t have any success. His burst at the snap was adequate and his hand usage was minimal. He hasn’t been able to generate any pass rush all season. He will however chase the quarterback anywhere on the field.

Against the run he was able to make two tackles. He combined to make a tackle with Jamir Jones in the third quarter after a three yard gain. His solo tackle came in the fourth quarter on a four yard run right at the two minute warning.

He logged valuable snaps this year both inside and on the edge when T.J. Watt was out. Against the run he did a solid job. His pass rush is where he must put his off season focus. With improvement in that area he may earn more snaps next year.

Heyward saved maybe his best game for his last. He had season highs in targets and receptions along with his second highest yardage total.

In the run the game, he was pretty good against the Browns. Most of his blocks come across the formation to block on the edge. He had a nice cut block and three good blocks to help on running plays. He showed improvement in this area as the season endured.

In the passing game, he had one rep as a pass blocker. He chipped on the right edge and took out two defenders.

He was asked to run routes on 9 plays. Most common were the Flat and Slant routes. His first reception was on a Drag route behind the line of scrimmage. He caught the ball in stride and gained 11 yards after the catch. Reception number two came on a beautiful seam route. He displayed very good body control and hands to go up and make a tough catch.

This is a beautiful route by Heyward from the slot. It begins with a hesitation release with good acceleration up field. He will press inside to get the defender on his heels before cutting up field to create space.

His final catch came on a slant in the red zone to set up the last score. It was another good catch going low to corral the pass. His final target came in the end zone. It was a corner route that he adjusted back inside to work with the quarterback. The throw was high and he was unable to come down with it.

Connor became a cog in the offense and showed off his versatility to block, catch and run with the ball. He has shown he can be a bigger part of the offense. There is still work to be done as a blocker and route runner but the arrow is pointing up.

After a strong showing against the Ravens, Robinson got the start again in the season finale. This effort was less successful but still good for him to get the experience.

Robinson’s struggles started right away. He looked a bit overwhelmed looking unsure of where he should be on a couple of plays. He fell trying to make a tackle in coverage on the first play which led to a big gain. On a running play to his left, he attempted to undercut the climbing offensive lineman putting himself in a bad position. On his second to last play of the game he either went rogue or was on a green dog blitz. He accelerated and got in the backfield quickly but missed the tackle. He played just one play after that.

His tackles came on a quarterback scramble and a play downhill into a big hole.

This game was a good teaching moment for Robinson. That want him to keep is aggressiveness but he must learn to harness it; play under control. He was very frenetic in this game. His few flashes give you hope his development can continue.

Warren topped 30 offensive snaps for third time this season. They used him on the field with Najee Harris on four plays utilizing him on the wing.

His six carries were highlighted by a nice 22 yard gain on a counter play. He starts to his left and come back to his right with Heyward leading the way with a nice block. Coupled with a big block by Diontae Johnson downfield made for a big gain. He got a goal line carry late in the game and yes the idea is to get into the end zone as quickly as possible. But if he uses a split second of hesitation he may have had a better hole and may have score. I can’t fault him for running downhill in this situation though.

Here is the 22 yard run by Warren.

In the passing game he was used to chip on the edge a lot. You might expect that with Myles Garrett but he was actually usually chipping on the right opposite of Garrett. Those chips led to him releasing in the Crease and that is where his first two receptions came. He gained four yards after the catch on second and long. The second reception he made a nice cut back inside to get a first down.

His final reception came on a Flat route to the left. He added a couple yards after the catch and converted another first down. He did have the ball go through his hand on one pass on the right sideline.

Warren was the biggest surprise out of the rookies. Getting 31% of the offensive snaps was not expected. He proved himself in pass protection and earned carries and targets. His contributions had a good effect on the health of Harris as well. For next year he can work on not lunging as much in pass protection and making himself more valuable as a receiver.