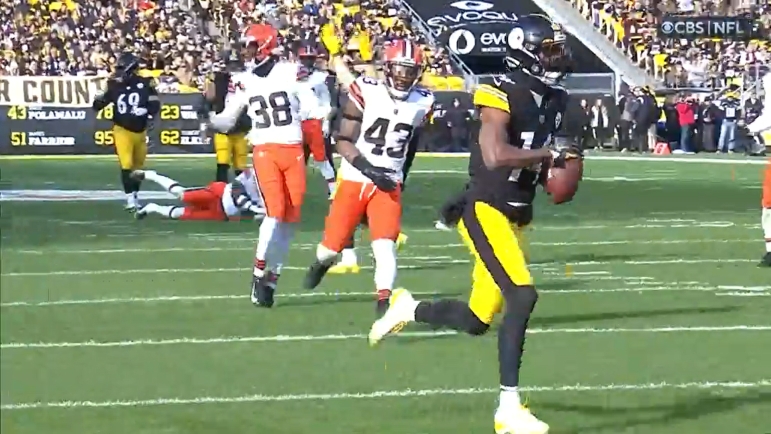 Turns out, longtime Pittsburgh Steelers GM Kevin Colbert’s final draft class with the organization might be one of his better ones, if things continue to trend in the right direction like they did in 2022 for the black and gold’s rookie class.

During the 2022 season, the Steelers saw the third-most snaps offensively from its rookie class out of all 32 teams, right behind the Seattle Seahawks and Los Angeles Chargers, according to ESPN Stats & Info. Of course, those snaps were played by quarterback Kenny Pickett (804), wide receiver George Pickens (882), running back Jaylen Warren (342) and tight end Connor Heyward (175) on offense.

All four rookies graded out at 68.8 or higher in Pro Football Focus’ grading metrics. A 60.0 is considered average, meaning all four rookies were above average on the season in PFF’s eyes.

That’s rather promising for the Steelers moving forward on offense, PFF’s William Moy writes regarding the Steelers’ offensive class in his piece detailing all 32 teams Tuesday.

“Nearly all of Pittsburgh’s rookie contributions came on offense, with WR George Pickens and QB Kenny Pickett both playing over 800 snaps this year and RB Jaylen Warren and TE Connor Heyward combining for 517 snaps,” Moy writes for PFF.com. “Pickett, the 20th overall pick and first QB taken in the draft, had a shaky start to the season but things looked as though they were really starting to click down the stretch. From Week 12 to Week 18, Pickett’s 88.9 passing grade ranked second among the 30 QBs who attempted at least 100 passes. He also ranked second over that stretch with a 6.9% big-time throw rate while ranking first with just a 1.1% turnover-worthy play rate.”

Things really started to click in the second half of the season for Pickett, who helped pilot the Steelers to a 6-2 record as the starter down the stretch (backup Mitch Trubisky added the seventh win for the Steelers in their 7-2 second-half run). He looked like a much different quarterback compared to the first half of the season when he took over in Week 4 against the New York Jets at halftime.

The future appears rather bright for Pickett, who finished with a grade of 75.5 overall on the season, throwing for 2,404 yards , seven touchdowns and nine interceptions, adding 237 rushing yard and three touchdowns on the year.

George Pickens had a strong rookie season as a receiver. But he was just as much fun to watch as a blocker. Put DBs and DL on notice. Some of his best blocks of 2022. #Steelers pic.twitter.com/Sr1mi1mXae

Pickens looks like a future No. 1 receiver for the Steelers moving forward as he showed great chemistry down the stretch with Pickett, especially on back-shoulder, contested-catch throws down the sideline. Pickens caught the game-winning touchdown in Week 16 against the Las Vegas Raiders from Pickett, and added a touchdown in the season finale against the Browns.

In his first season as a pro, Pickens finished with a grade of 68.8 from PFF, recording 52 receptions for 801 yards and four touchdowns.

Warren and Heyward played in limited roles, combining for 517 snaps offensively, but both showed serious flashes. Warren graded out at a 73.8 on the season, emerging as a bottom of the depth chart guy in training camp into the No. 2 running back once the season started, taking snaps way from Najee Harris in the process.

Jaylen Warren continues to impress in limited reps. Really bailed the #Steelers offense out here on 3rd and long. Created this all on his own after a checkdown from Mitch Trubisky. pic.twitter.com/BB8vrVb89Y

He showed he can be an all-situations running back and really impressed in pass protection. In his rookie season, Warren finished with 77 carries for 379 yards and one touchdowns, adding 28 receptions for 214 yards.

Heyward saw limited reps behind Pat Freiermuth and Zach Gentry as the third tight end on the roster, but he made some plays when thrown the football and really showed signs of improvement as a blocker. Heyward hauled in 12 of 15 targets on the season for 151 yards and one touchdown. He looks like a solid role player moving forward.

The future in Pittsburgh offensively looks very bright, especially with a rookie class featuring the four that stepped up and produced at a high level when called upon. They went through the growing pains in 2021 and came out the other side better for it. Now let’s see what those four can do moving forward as part of the larger core offensively in the Steel City.