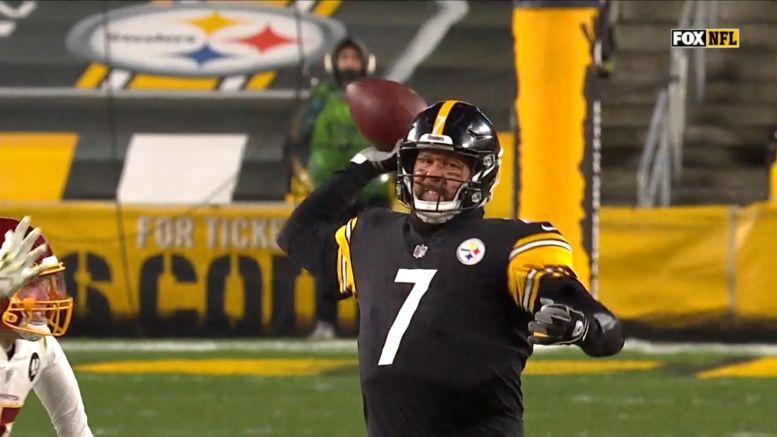 Former Pittsburgh Steelers QB Ben Roethlisberger hopped on 105.5 WDVE Thursday morning and talked about the NFL playoffs and the quarterbacks that are playing in the postseason as well as gave his thoughts on the Steelers’ 2022 season and specifically how he thinks the team can improve next season under OC Matt Canada who is going to be back with the team for another year.

When Mike Prisuta asked Ben on the emotion he felt watching his first year of Steeler football without being a player and if there was any envy of wanting to get back on the field, Ben responded that he was comfortable with his place this year, albeit outside of a few certain instances.

“There was no envy,” Ben answered. “There was, well, the only envy I had was a couple times in the fourth quarter when I would’ve wanted the ball.”

The Pittsburgh Steelers faced several occasions late in games during the 2022 season where Ben would’ve been able to itch that scratch that any true competitor has inside of him. It’s easy to look back to the Sunday Night Football game against the Miami Dolphins with Pittsburgh had the ball on two separate occasions with a chance to win the game late in the fourth quarter, but rookie QB Kenny Pickett threw two costly INTs that effectively sealed the victory for Miami.

Pittsburgh also had several close games at the beginning of the season where they may wish they still had Ben Roethlisberger at QB, losing to the Browns, Patriots, and Jets all in a span of three weeks after having multiple opportunities with the ball in the second half, but were unable to get anything going, leading to their terrible 2-6 start.

However, the team hit its stride in the second half of the year, going 7-2 with Pickett leading back-to-back game-winning drives in the fourth quarter against the Raiders and Ravens to keep Pittsburgh’s playoff hopes alive and Mike Tomlin’s non-losing season streak intact. There is no doubt that Roethlisberger would have liked to be in that situation again in the fourth quarter with the ball in his hands with a chance to drive down the field and win the game.

However, Ben has now passed that torch on to Kenny Pickett who had three fourth-quarter comebacks and four game-winning drives as a rookie according to Pro Football Reference. For so many years, Steelers Nation could trust Ben Roethlisberger to give the team a chance late in the fourth quarter if he had the football and some time left. While Pickett has a long way to go in his development, he has shown poise and leadership beyond his years, showing glimpses of that clutch gene his predecessor was known for.

13 years ago today: TD pass from Ben Roethlisberger to Santonio Holmes in Super Bowl XLIII between the Cardinals and the Steelers.

That's how you be great! #Steelers #NFLpic.twitter.com/doU1B6dyiS