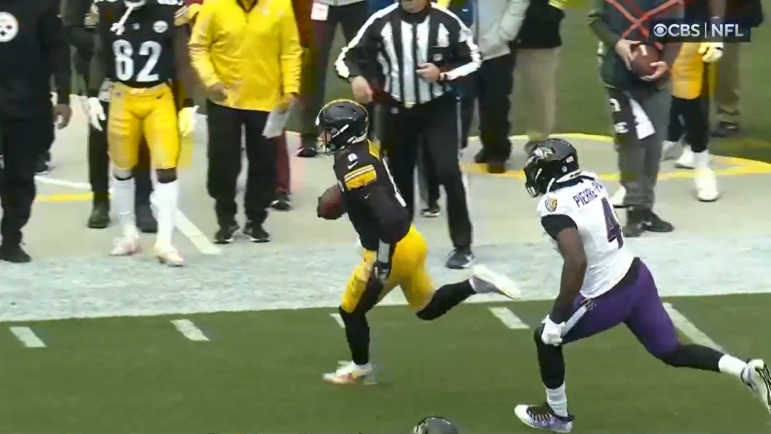 Ben Roethlisberger isn’t designing the Pittsburgh Steelers’ 2023 offense. But if he could pitch a couple of ideas, he’d like to see Kenny Pickett use his legs more often and this offense create more explosive plays.

Though Pickett did plenty of scrambling his first year, it’s something Roethlisberger wants to see more of in his first full year starting. That’s what he said in his latest interview on 102.5 DVE Thursday morning.

“One of the biggest things that I was most impressed with and didn’t really fully understand was Kenny’s mobility. It’s more than just escapability. I’ve seen [Pickett] kind of run away from guys. He can create with his legs. So I would use that more.”

Roethlisberger didn’t get super specific about how exactly he’d use it more but it sounds like he wants more designed concepts. Some of that exists in Canada’s offense, he bookended the year by running a heavy dose of sprintouts, but there wasn’t much in the form of designed run game. Quarterback sneaks aside, the team didn’t call many – or really any – designed keepers or zone reads for Pickett. Some of that may have been out of protecting their first-round quarterback but even the occasional changeup to keep a defense honest is smart to have.

With a line that proved itself by year’s end and the need for any successful offense to be able to rip off chunk plays, and of course, get the ball in the hands of its weapons. Roethlisberger hopes Pittsburgh makes strides there next season.

“If I was a betting man, I’d bet on them taking more shots and utilizing George and Diontae and, and Pat more.”

The Steelers’ passing game should open more than the conservative shell it was for most of the season, especially the backhalf of the year. More aggressive initially with Mitch Trubisky, the team went into pure “protect the ball mode” down the stretch, working well enough to see the team finish 7-2. The Steelers finished this past year with just 44 completions of 20+ yards, 23rd in the league.

But just as the offense evolved from 2004 and beyond big plays are needed. Pickens will be a more consistent threat in the offense while Johnson is bound to find the end zone after setting an infamous record in 2022. As Roethlisberger notes, Pickett should be able to put his stamp on the offense in greater fashion next year.