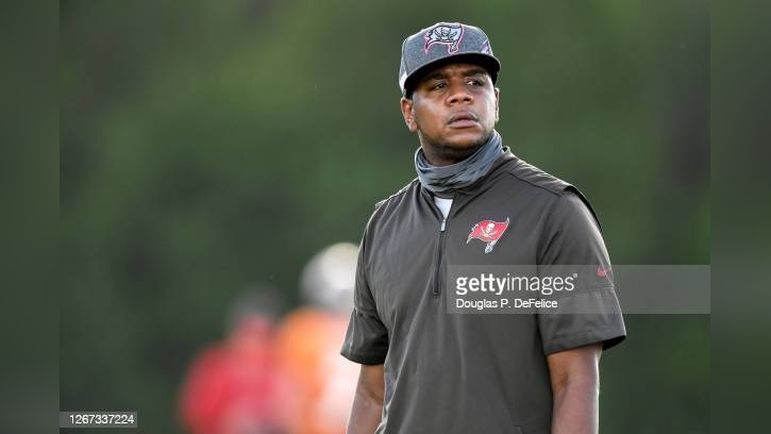 The Tampa Bay Buccaneers are expected to fire offensive coordinator Byron Leftwich. According to the Bucs’ beat site Pewter Report, it’s a move that’s been in the works for awhile and will soon be made official after the team’s 31-14 Wild Card loss to the Dallas Cowboys Monday night.

“Now that the Bucs’ 2022 season has come to a close following Tampa Bay’s 31-14 loss to Dallas in the Wild Card round of the playoffs, Pewter Report is reporting that the team is expected to fire offensive coordinator Byron Leftwich.”

It’s a quick fall from grace for Leftwich. A year ago, he was viewed as one of the NFL’s hottest head coach candidates and reportedly came close to reaching a deal with the Jacksonville Jaguars before it fell through at the last second. Leftwich stayed on as the team’s OC as they moved to new head coach Todd Bowles. But the Buccaneers’ offense was a mess throughout the season. Even with Tom Brady, the offense finished 25th in points per game and scored more than 24 points just twice all season.

Leftwich was routinely criticized for a stale gameplan that centered around establishing the runs and using a heavy dose of screens, issues that were evident in Monday night’s loss to the Cowboys. Tampa Bay was shutout against Dallas until the third quarter and their points came in garbage time, asking Tom Brady to throw 66 times as the offense still averaged only 4.8 yards per play.

Leftwich was a longtime NFL quarterback who spent three years as a backup quarterback in Pittsburgh, throwing two touchdowns and one pick during his time as a Steeler. He broke in as a NFL coach in 2016 as an intern with the Arizona Cardinals before being promoted to QBs Coach and then interim offensive coordinator in 2018. Tampa Bay hired him as their OC in 2019. Now, it sounds like he’ll be looking for any NFL job.

The Steelers have not fired their OC Matt Canada, who remains on-staff as of Monday. So far, Pittsburgh has not made any coaching changes though they could lose Brian Flores, who has interviewed for defensive coordinator positions while the Arizona Cardinals have requested to interview him for the team’s head coach vacancy. Flores is currently a co-favorite to be hired by the Cardinals while the Browns could make their DC decision as early as Tuesday.

UPDATE (1:37 PM): No final decision on Leftwich has been made, per ESPN’s Jenna Laine.

I’m told no decisions have been made regarding offensive coordinator Byron Leftwich and that it’s speculative at this time. We’ll see what the day holds. Players and coaches have been in meetings throughout the morning. We talk to Coach Todd Bowles at 3:30 p.m.