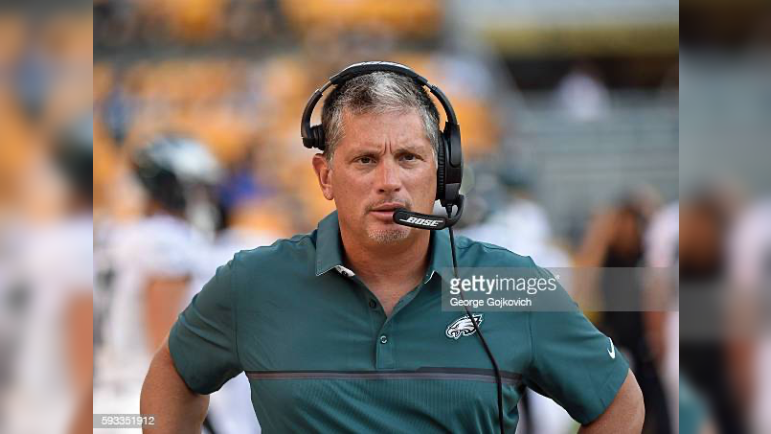 Check the box on another filled coordinator position in the NFL.

The Cleveland Browns plan to hire Jim Schwartz as their defensive coordinator, per sources.
Schwartz who won a Super Bowl as the Eagles DC in 2017 beat out Sean Desai, Dennard Wilson, and Brian Flores for the job.

The #Browns are hiring Jim Schwartz as their defensive coordinator, per source.

As Russini pointed out in her tweet announcing the hiring, Schwartz was chosen over the likes of Dennard Wilson, the Defensive Passing Game Coordinator/Defensive Backs coach of the Philadelphia Eagles; Sean Desai, the associate head coach and defensive assistant for the Seattle Seahawks; and current Pittsburgh Steelers senior defensive assistant and linebackers coach Brian Flores.

Previously, Schwartz was the defensive coordinator in Philadelphia from 2016-2020, helping lead the Eagles to a win in Super Bowl LII over the New England Patriots. While in Philadelphia, Schwartz’s defense finished 12th, 4th, 12th, 15th and 20th in scoring before he was ultimately let go along with former head coach Doug Pederson after the 2020 season.

The last two seasons Schwartz has served as a senior defensive assistant with the Titans.

The decision to hire Schwartz in Cleveland closes a door on Flores, who interviewed with Cleveland last week for the vacant coordinator role.  Though one door closes, Flores still has an opportunity in Arizona for the head coaching job. He is slated to interview for the vacant head coaching job with the Cardinals and has a connection to new GM Monti Ossenfort, who spent time in New England’s front office during the same time Flores was with the Patriots.