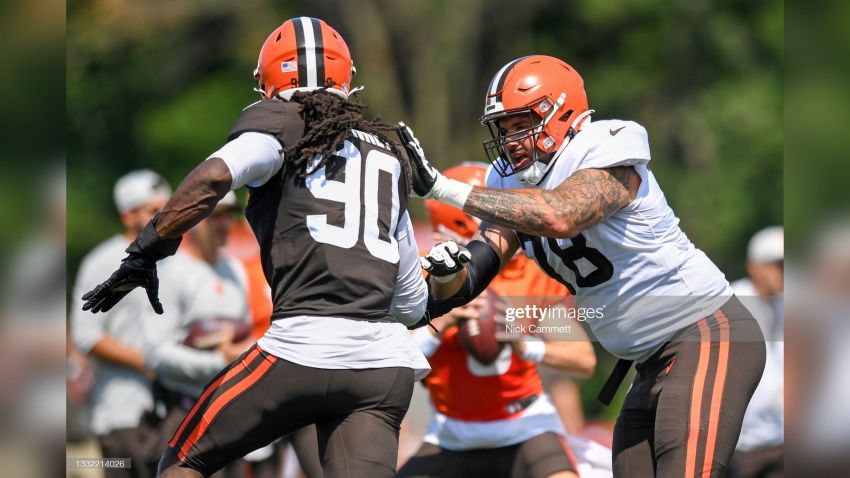 After being sent home from practice Friday following some controversial comments regarding the coaching staff of the Cleveland Browns and fellow teammate Myles Garrett, veteran defensive end Jadeveon Clowney won’t play Sunday in the season finale against the Pittsburgh Steelers at Acrisure Stadium at 1 p.m., according to CBS Sports NFL Insider Josina Anderson.

According to a tweet from Anderson, Browns head coach Kevin Stefanski has told players that Clowney won’t play in the season finale, putting an end to his time with Cleveland. Clowney is set to hit free agency again this offseason at the age of 30 after signing a one-year deal in free agency in late May.

I’m told #Browns head coach Kevin Stefanski told the team at practice that Jadeveon Clowney would not play Sunday vs the #Steelers, per sources.

The decision from the Browns, though not entirely official outside of Anderson’s report, is no surprise.

UPDATE: Saturday morning the Browns officially downgraded Clowney to OUT for Sunday’s season finale against the Steelers, marking an official end to Clowney’s tenure in Cleveland.

The #Browns officially downgrade DE Jadeveon Clowney to OUT for Pittsburgh https://t.co/d2gKKI1QPg

On Wednesday, Clowney raised eyebrows by telling Mary Kay Cabot of Cleveland.com that he’s 95% sure he won’t be returning to the Browns in 2023, Clowney explained that he feels he needs to play in a system where the coaching staff believes in him and his ability to make plays, saying it can’t “just be me believing in myself.”

Clowney then went on to state that he believes the team is propping up Pro Bowl defensive lineman Myles Garrett at his expense, putting him in the ideal matchups rather than having the two ends play sides, and questioning whether that’s best for the team or for just the player.

“You’re all trying to get somebody into the Hall of Fame when all that matters is winning,” he told Cleveland.com, which certainly seems to imply he questions whether putting Garrett in ‘opportune’ matchups is in the team’s best interests. “Everybody got here for a reason, and we can all make plays. I know I am.”

The decision to not only send him home on Friday from practice, but to ultimately sit him down for the season finale — should that be the official decision from the Browns — should not be a surprise overall. Clowney is not part of the franchise’s plans moving forward, considering he’s a pending free agent. Add in the fact that he not only took a shot at coaches, but a teammate in Garrett as well, and it’s clear that the Browns just simply aren’t going to deal with it and are willing to sacrifice a bit of depth and production in the regular season finale for the good of the franchise moving forward.

Myles Garrett, on Clowney saying the #Browns are more concerned with getting Garrett in the hall of fame than winning games: pic.twitter.com/PWFpc420E8

The former No. 1 overall pick in 2012, Clowney has been mostly a disappointment in his career, largely due to his inability to stay healthy. This season, Clowney has just 2.0 sack as he enters free agency at 30 years old. He remains a very good run defender overall, but the high-level pass-rush abilities he displayed early in his career as a member of the Houston Texans and Seattle Seahawks have disappeared.

And, based on some pointed comments from Browns defensive line coach Chris Kiffin Friday, it sounds like Clowney was only willing to play on third downs in recent weeks, rather than first and second downs, putting the Browns in a tough spot.

At 30 years old and entering free agency with a lack of production and now a dark, self-created cloud hanging over him and his character in the locker room, Clowney could be staring at the potential of not having many suitors at all in free agency.