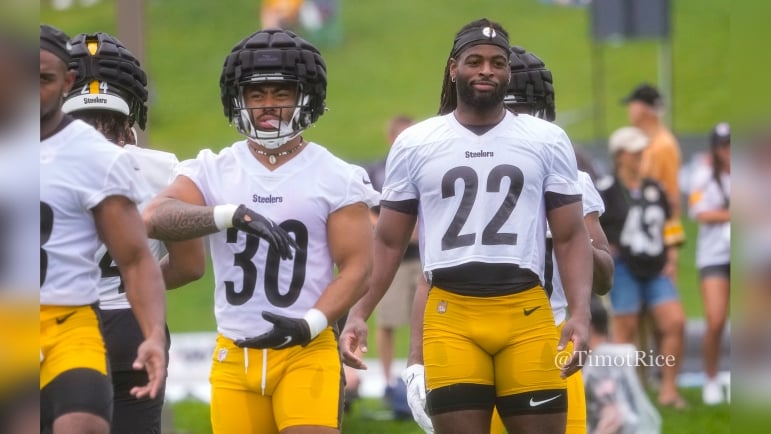 Coming out of the Week 9 bye week, the Pittsburgh Steelers seemed to place more of an emphasis on getting rookie undrafted free agent running back Jaylen Warren more involved in the offense.

Warren, to that point, seemed to be having more success than second-year running back Najee Harris at that point in the season. He looked more explosive, decisive and was running rather hard. Of course, Harris was also dealing with a nagging LisFranc injury that had him playing with a metal plate in his cleat for the first half of the season.

With an emphasis placed on Warren getting more touches and Harris getting more of a breather, the decision by the Steelers in turn mad the Steelers rushing attack all the more powerful. Since the Week 9 bye, the Steelers have had outputs of 217, 172, 154, 156 and then a 198-yard performance on the ground in Week 17 against the Baltimore Ravens on Sunday Night Football.

Harris has found his game once again and is looking like the Alabama guy the Steelers drafted in the first round, while Warren continues to be a serious spark plug for an offense lacking explosion.

On Sunday night, Harris and Warren were the first pair of running backs to have 75+ yards in a single game together since Le’Veon Bell and LeGarrette Blount did so in 2016.

It's the first time two Steelers have 75+ yards rushing in a game since 2016 when Le'Veon Bell and LeGarrette Blount did so.

Stats of the weird. #Steelers https://t.co/4dFStBYdhz

Together, the two have become quite the formidable force in recent weeks. It’s helped that the Steelers have been able to rotate the two and keep them fresh while limiting wear and tear.

For head coach Mike Tomlin, while there is a hardcore plan that the Steelers abide by when it comes to rotating the two running backs, he instead lets his eyes and ears tell him what needs to be done in-game, knowing when to give Harris or Warren a blow, he said to reporters Tuesday during his weekly media availability.

“I think it’s continual. It’s something that’s fluid. It is not only a plan, but it’s also based on what transpires in game,” Tomlin stated, according to video via the Steelers official YouTube page. “Long runs usually produce fatigue, et cetera. So there’s a hardcore plan, but we better be open to adapting and adjusting that plan based on what it is we see in game.”

In the last eight weeks, that’s how the Steelers have operated. They’ve decided to ride the hot hand when necessary, whether that’s Harris or Warren, and they’ve done a good job of keeping the two fresh, giving Harris a couple of series, and then letting Warren handle a series on his own.

Lately, it’s worked quite well as the pair have been rather fresh down the stretch, helping the Steelers claw their way right back into the playoff picture with one week to go. It’s good to see Tomlin not only embracing a RB-by-committee approach at times, but leaning on it when necessary.