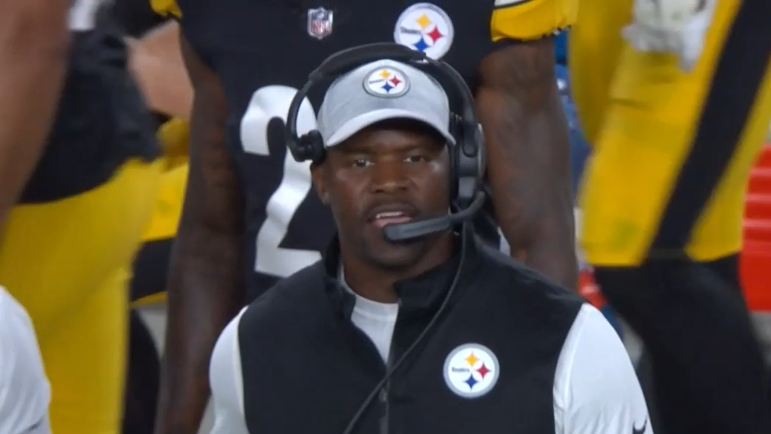 That one-year stint with the Pittsburgh Steelers has seemingly turned out rather lucrative for Brian Flores.

Flores, who spent the 2022 season as a senior defensive assistant and linebackers coach with the Steelers after being hired in mid-February by head coach Mike Tomlin, could be on the move soon. After interviewing for the Cleveland Browns’ vacant defensive coordinator position on Thursday, Flores could be in line to interview with the Arizona Cardinals for their vacant head coaching position.

According to NFL Network insider Ian Rapoport, the Cardinals requested permission from the Steelers to interview Flores for their vacant head coaching position. Arizona fired former head coach Kliff Kingsbury on Monday following a 28-37-1 stint in the NFL.

Flores previously was the head coach in Miami, where he went 24-25 over three seasons.

The Steelers took advantage of Flores surprisingly remaining available, hiring him in February after he was fired as the Miami Dolphins’ head coach, before then suing the Dolphins, multiple NFL teams, and the league for a variety of complaints ranging from accusing Dolphins’ owner Stephen Ross of offering Flores money to lose games to unfair hiring practices by the league.

Passed over by the rest of the league, in large part due to his pending lawsuit and the dark clouds he put over the league with the accusations, Tomlin hired Flores early in the offseason, adding a great defensive mind and great coach overall to the defensive side of the football.

When Tomlin hired Flores, expectations were that it wouldn’t be a long-term marriage as Flores would undoubtedly get looks elsewhere after his first season with the Steelers, assuming things went rather well in Pittsburgh.

They did for Flores as the longtime defensive coach helped turn Devin Bush’s career around in one season of work with him, while also bringing seventh-round pick Mark Robinson along slowly but surely at the position.

Now, Flores has a chance to get back to where he wants to be in the NFL, which is as a head coach after three relatively solid seasons in Miami, all things considered.

Dulac: Brian Flores To Interview With Browns Thursday, Has ‘Other Offers’

The Cardinals fired Kingsbury on Monday following a disastrous finish to his fourth season in the desert, 10 months after he signed a lucrative extension with Arizona. Prior to Kingsbury as head coach, the Cardinals had Steve Wilks as head coach for one season before firing him. Wilks remains on the lawsuit with Flores at this time.

This is an interesting one—Flores crushed his 2018 interview with the Cardinals, word got around on him, and a year later he had four interviews and landed the Dolphins job. With that context, makes sense that Michael Bidwill is circling back to him. https://t.co/kFmi85ApAc

Should Flores be hired elsewhere this offseason, the Steelers would not receive any compensatory picks for the promotion of minority candidates. That incentive was put in place through 2020 Resolution JC-2A by the league in the summer of 2021, in which the league further promoted diversity in the hiring process, rewarding teams that help develop minority head coaches, coordinators and executives.

The NFL rule states that those minority coaches and executives have to be with a team a minimum of two years to be eligible for the compensatory picks.