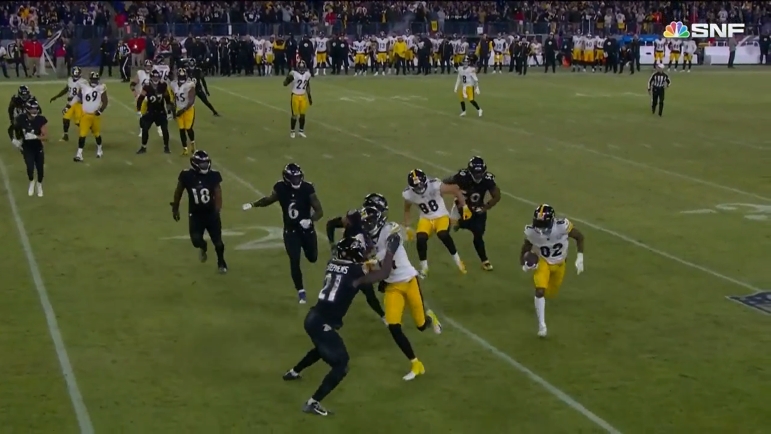 Not sure there’s another way to describe this group overall without using the word cardiac. That’s what they are at this point.

The Pittsburgh Steelers win ugly, but most importantly — they win.

That’s exactly what occurred on Sunday Night Football in Week 17 against the Baltimore Ravens as rookie quarterback Kenny Pickett again led a game-winning drive in the final minutes, firing a strike on the move to running back Najee Harris down the left sideline for the game-winning score, and star safety Minkah Fitzpatrick picked off Tyler Huntley on the Ravens’ final drive to seal the 16-13 win, keeping the black and gold alive in the AFC playoff picture again.

Another week, another thrilling late-game comeback from the rookie Kenny Pickett, this time on the road in a hostile environment.

Much like the comeback against the Las Vegas Raiders on Christmas Eve, Pickett made magic happen after having his fair share of ups and downs on the day. The final numbers might not be eye-popping (15-for-27, 168 yards, one touchdown), but he got it done when it mattered most, going 5-for-6 for 64 yards on the game-winning drive.

His 20-yard throw rolling to his left and throwing back across his body to tight end Pat Freiermuth on the dive was remarkable. So, too, was the 28-yard dart down the middle to Steven Sims, which then ultimately set up his 10-yard touchdown pass to Najee Harris on the run down the left sideline on a broken play for the win.

It’s very hard to quantify, but Pickett’s moxie and general “it” factor is off the charts. He never blinks in big moments and really brings a serious calming influence to those moments, which resonates with his teammates. He simply doesn’t blink and is the rising tide that lifts all boats in those moments.

The Steelers absolutely have something here with Pickett. Now, it’s about finding that consistency throughout games so that the Steelers don’t have to rely on the late-game heroics every week.

What a performance from the duo of Harris and Jaylen Warren.

Harris had arguably the best game of his career to date, finishing with 111 rushing yards on 22 carries and added two catches for 14 yards, including the game-winning 10-yard touchdown catch late in the game on a scramble drill with Pickett, beating Ravens linebacker Roquan Smith up the sideline for the score.

Warren was terrific as a change-of-pace option behind Harris, finishing with 12 carries for 76 yards. He ripped off an explosive 31-yard run on the first drive of the game on a well-designed jet sweep that was a new wrinkle for offensive coordinator Matt Canada. Between the tackles, Warren was a force, much like Harris.

Warren also was very impactful in the passing game, finishing with three catches for 22 yards, including a long of 10 yards to move the chains on the first drive of the game.

Outstanding night from the running backs.

On a night in which the run game was the focal point for the Steelers’ offense, the Steelers receivers didn’t quite have the impact many expected coming into the matchup.

Diontae Johnson (two catches, 35 yards) and George Pickens (two catches, 29 yards) weren’t as impactful overall, though they did make some key catches, including Pickens’ 15-yard grab to convert a third and 14 in the win in the first half. Johnson nearly came down with a big play later in the game on a deep shot from Pickett, but couldn’t get his second foot inbounds.

The issues with the receivers had to do with their inability to stay inbounds on routes, especially Pickens’ play on a scramble by Pickett in which he threw a seed on the run to Pickens. However, it was wiped out due to Pickens stepping out of bounds at the top of his route. Diontae Johnson also failed to come down with a catch on third down in the first half.

Steven Sims came up big for the Steelers late, hauling in his leaping 28-yard reception over the middle on the Steelers’ game-winning touchdown drive. He led the Steelers’ receivers with three catches for 34 yards on the night.

A false start penalty on the first drive of the game from Pat Freiermuth turned what should have been a touchdown drive into one that settled for a field goal. The pre-snap penalties continue to be pretty painful.

Good news is Freiermuth bounced back after that, finishing with three catches for 36 yards, including a clutch sliding 20-yard grab on the game-winning touchdown drive, moving the Steelers to midfield, setting up Pickett’s strike to Sims on the next play. He’s a sure-handed tight end and continues to make key plays in big situations for the Steelers.

After struggling a week ago from a blocking standpoint, Freiermuth, Zach Gentry and Connor Heyward bounced back in a big way, combining with the offensive line to really win at the point of attack and move people off the spot to open up big rushing lanes.

The last time the Steelers’ offensive line matched up with the Ravens’ front seven, Baltimore dominated from start to finish. That wasn’t the case this week.

Against the Ravens on Sunday Night Football, the offensive line came out determined and dominated throughout the matchup against Baltimore, helping the Steelers rush for 198 yards on 41 carries, controlling the game in the trenches and taking it to the Ravens throughout the night.

Kevin Dotson, Mason Cole and James Daniels really got after it on the interior, winning at the point of attack consistently, and creating a serious surge throughout the night. So, too, did Dan Moore Jr. and Chukwuma Okorafor.

Outside of the terrific performance on the ground, the Steelers allowed just two sacks, neither of which will go against the offensive line as Pickett was tripped behind the line of scrimmage and touched down on one, and then scrambled into a sack late in the game on his own instead of throwing the football away.

One of the very best performances of the season for the offensive line. Very impressive.

Baltimore running back J.K. Dobbins had another great game against the Steelers, rushing for 93 yards on just 17 carries, but overall the defensive line played rather well throughout the game.

Using a six-man front at times, the Steelers’ defense was able to consistently get off the field late in the game thanks to the work in the trenches from Larry Ogunjobi, Cameron Heyward and DeMarvin Leal. Ogunjobi finished with two tackles and Leal added three tackles, while Heyward led the charge up front with four tackles.

However, Heyward had a costly penalty late in the first half, getting called for an unnecessary roughness penalty in the pile after a third-down stop, extending Baltimore’s drive, which led to a 7-yard touchdown pass from Tyler Huntley to Isaiah Likely. It’s a penalty that largely shouldn’t have been called, but that can’t be happening with a veteran like Heyward, especially with the importance of these games down the stretch.

Placing more of an emphasis on stopping the run, Robert Spillane and rookie Mark Robinson received a significant amount of snaps on Sunday night and performed rather well.

Spillane led the Steelers with nine tackles in the win, including one tackle for loss. He played downhill with force and really did well reading his keys and finding the football. Robinson made an impact right away against the run, making a big hit on the first play of the game. He finished with seven tackles in the win and looked like a guy that could get more run next season as that BUCK linebacker.

Devin Bush had limited snaps in the win, but finished with two tackles, while Myles Jack was largely ineffective before leaving the game with a groin injury again.

Outside, T.J. Watt was outstanding on the night. Watt finished with four tackles, one sack and two tackles for loss, racking up a number of pressures on the night as well. He gave Morgan Moses a handful before the veteran offensive tackle was forced out of the game with an injury. Opposite Watt, Alex Highsmith played the run rather well, finishing with three tackles in the win. He didn’t create much from a pass-rush perspective though.

Once again, the defensive backs did a rather nice job against the Ravens, holding Huntley and Baltimore to just 120 passing yards on the night.

The corners really erased the receivers throughout the night.

Though tight end Mark Andrews had a great night, finishing with nine catches for 100 yards, the secondary really took a lot away from the Ravens in the passing game. Terrell Edmunds was really solid in his return to the lineup, playing well as that extra defender in the box and defending Andrews well at times.

He made a crucial play late on third down, breaking up a pass intended for Andrews that would have put the Ravens in field goal range for Justin Tucker. Instead, Baltimore punted the football, setting up Pickett’s game-winning drive.

Minkah Fitzpatrick called game in the end once again, picking off Huntley late on an ill-advised throw, capping off a strong night for the veteran safety, who finished with nine tackles.

Danny Smith’s unit is going in the wrong direction at this point in the season.

The kick coverage is a mess. Rookie Connor Heyward came up with a big miss on a kickoff for the second time this season, which allowed Justice Hill to rip off a 56-yard kickoff return in the second half. The coverage units have gotten progressively worse this season under Smith. It’s a massive concern.

Then there is the endless number of penalties on special teams plays themselves, like the holding call on Elijah Riley late in the game on a punt, putting the Steelers deep in their own territory. They are constantly shooting themselves in the foot on special teams.

Kicker Chris Boswell missed a field goal in the win, but bounced back to drill three field goals in the win. However, he’s sitting at just a 69.2% conversion rate on the season. That’s one of the lowest numbers in football this season. It’s been mostly a lost season for the Pro Bowl kicker, much like the 2018 season was.

Punter Pressley Harvin III had a strong night punting the football, averaging 49.5 yards per punt on two punts, downing one inside the 20-yard line.