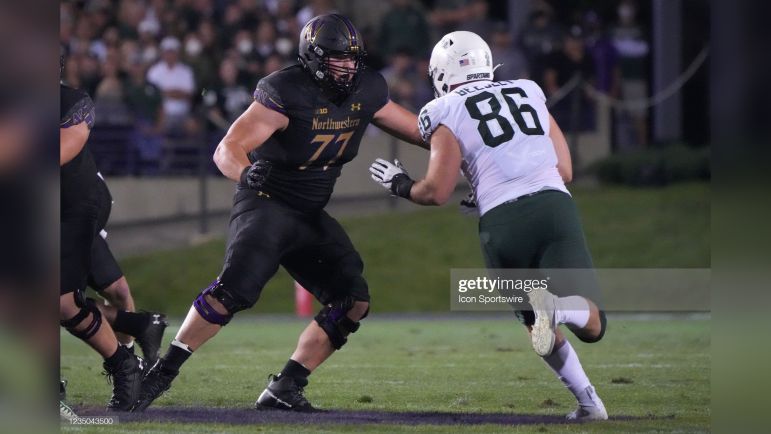 The 2023 NFL Draft is several months away, but with the Pittsburgh Steelers’ 2022 season coming to an end last weekend, it’s time to ramp up the pre-draft process and specifically what prospects this team may look to draft to improve their roster for 2023 and beyond.

One position of need that the Steelers could look to address early in the draft is the offensive line. While the OL played better down the stretch, the left side particularly has struggled at times with LT Dan Moore Jr. and LG Kevin Dotson often held under the spotlight due to their inconsistencies.

One of the top offensive line prospects in this draft class is Northwestern OT #77 Peter Skoronski. Pro Football Focus recently published their draft profile on Skoronski and listed the Pittsburgh Steelers as one his best NFL fits.

“As a true freshman, Skoronski earned a 71.0 pass-blocking grade, a mark that he boosted to 93.0 this past season as a junior,” said PFF’s Mitch Kaiser on Skoronski. “That figure ranked first in college football among all offensive tackles. He is by far the best tackle in the country after putting together one of the top seasons of the PFF era. We project him to be a day-one starter in the NFL and to slide in at left tackle.”

The 6’4, 315lb junior lacks ideal length and size, but is one of the most technically sound offensive linemen in this draft class, mirroring pass rushers with ease while playing with great base and effort as a run blocker. Having conducted a scouting spotlight earlier this season on Skoronski for Steelers Depot, he looks like the real deal, having the technical proficiency as well as the gritty desire to generate a push upfront as well as hold his own against some of the best pass rushers in college football.

Arm length will push Peter Skoronski inside to G/C for several NFL teams. But the tape shows a blocker with the talent to potentially overcome his lack of length at LT.

A dozen NFL prospect outliers who might be the exceptions: https://t.co/Ak3grlcuui pic.twitter.com/9JFjjhCDm4

Still, while Skoronski has the intangible traits you look for as well as the football character and intelligence of a pro-level player, His lack of ideal size could cap his ceiling and force a position change at the next level. He is on the shorter and lighter side when it comes to OTs, making his susceptible to power rushes. He also lacks idea arm length, allowing defenders to get hands on him first to shed blocks in run defense or in pursuit of the quarterback.

…so this Lukas Van Ness kid has some power! Looks like f'n Justin Smith here lol

And against Peter Skoronski – who might be the best OT in CFB this season pic.twitter.com/jLp3Bg7cVN

Therefore, while Skoronski may be listed as a tackle, many scouts and teams in the league are viewing him as a potential guard at the next level that can kick inside and provide a team a quality player there for the next decade. Several evaluators have floated out Joe Thuney of the Chiefs as a potential comparison for Skoronski as Thuney played OT at NC State before kicking inside when he was drafted by the Patriots, becoming one of the best guards in football.

The Pittsburgh Steelers could be in the market for an offensive tackle early in the 2023 NFL Draft should they decide to pull the plug on Dan Moore Jr. being the LT of the future for the team after the 2022 season. The same could be said for LG with Kevin Dotson’s future up in the air as a pending free agent after the 2023 season. While he may need some more work in the weight room to hone in his battles versus power, Peter Skoronski should be a name Pittsburgh will keep an eye on when looking as a potential solution to either LT or LG with the capability to play both positions at the next level.