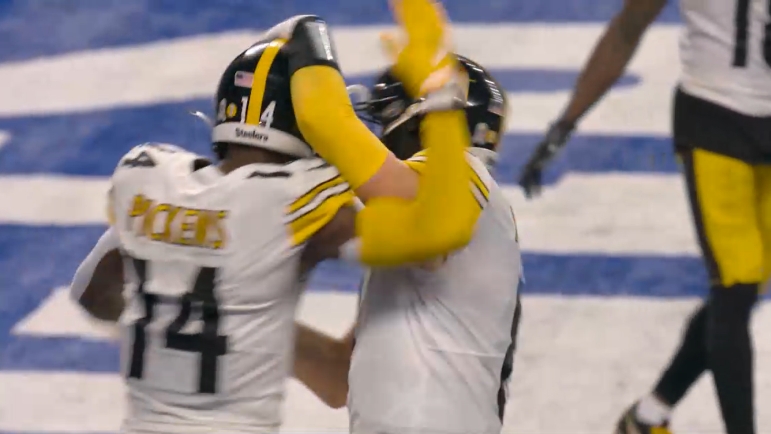 Kenny Pickett showed substantial growth as a passer down the stretch of the 2022 season. While his stat line wasn’t eye-popping by any means, his efficiency notably improved as he was able to sustain drives in the waning moments of games and put the offense into the end zone to win crucial contests against the Raiders and Ravens late in the season. Pickett particularly excelled when targeting fellow rookie WR George Pickens this season as Pickett had four touchdowns and no interceptions when targeting Pickens in 2022 compared to zero passing touchdowns to six interceptions when targeting all other wide receivers.

In fact, according to ESPN Stats & Information in a recent piece done by ESPN’s Brooke Pryor, Pickett had a 97.6 QBR when targeting Pickens this season, the best QBR by any quarterback targeting any receiver in 2022 with a minimum of 50 attempts.

The Steelers were last in the NFL in explosive play TDs in 2022 with two. One of those two came against Browns on Sunday. Both went to George Pickens from Kenny Pickett. #Steelers #NFL pic.twitter.com/x3kO0U18pu

The Pickett to Pickens connection was a catchy moniker that began to be mentioned shortly after the two were drafted this spring, but what was once a catchy phase has now become something that Pittsburgh and the rest of the league should take note of. While Pickens still has a long way to go in terms of becoming a well-round receiver at the NFL level, he proved that he belonged in his first season, making an immediate impact while the likes of Diontae Johnson and Chase Claypool (when he was still with the team) struggled to find their footing given Pittsburgh’s QB situation to start the season.

Once Pickett was inserted into the lineup in Week 4 against the Jets at halftime, he showed an immediate mind meld with Pickens as the receiver topped 100 yards for the first time in his career, being the most effective receiver as Pickett’s disposal in his first appearance. While the targets went up and down throughout 2022, Pickens maximized the opportunities Pickett gave him, making contested catches routinely whilst giving Pittsburgh another legitimate red zone weapon that can also stretch defenses vertically.

This CATCH by George Pickens 😳 pic.twitter.com/O2D0sGA4Wf

Diontae Johnson may be the WR1 in Pittsburgh, but he is coming off the least efficient season of his career, posting the most receptions in a single season without scoring a single touchdown of any kind. He was targeted a whopping 147 times but converted that to just 86 receptions (58.5%) for 882 yards. Meanwhile, Pickens secured 52 receptions on 84 targets (61.9%) for 801 yards and four receiving TDs along with a rushing TD.

The two receivers play different roles in the offense and Johnson is a volume-based WR, so having more targets than Pickens is to be expected. However, given the immediate chemistry between Pickett and Pickens in their rookie season and the inefficiencies of Johnson, perhaps closing the gap on Johnson and Pickens’ respective opportunities would help Johnson’s efficiency whilst allowing Pickens to take that step forward in Year Two.