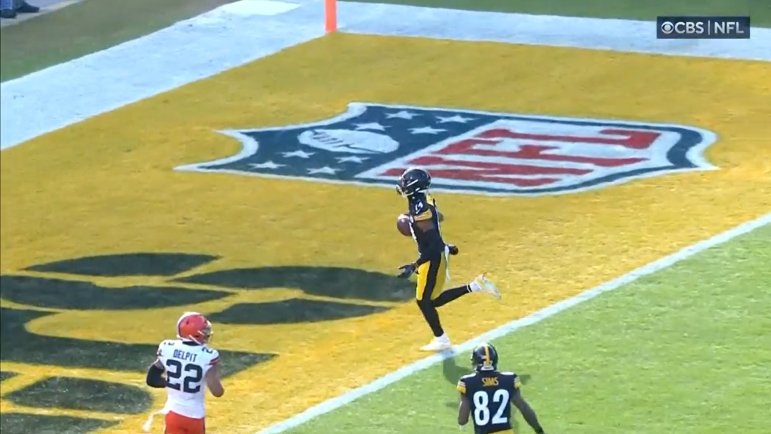 Though it doesn’t feel like it, the Pittsburgh Steelers officially over, they did win a game today. They did score 28 points, their most in a win all season. And Kenny Pickett did find George Pickens for his fourth score of the season, wide open down the right seam for his easiest score of his rookie year.

Speaking to reporters after the final game of his rookie year, Pickett described the play and how his tape study made that touchdown happen.

“It was something that we saw throughout the week watching tape,” he said via the team’s YouTube channel. “The Saints ran it and I kind of was just like, ‘Hey, I think this has a shot.'”

Pickett’s plan worked to perfection. The Browns bit on the in-breaking routes, leaving Pickens all alone down the right side for a 31-yard score, the team’s longest offensive touchdown of the season.

The Saints did not have a long touchdown in that game against the Browns and their longest catch by a receiver was only 16 yards on a different type of play. So I haven’t been able to immediately find the play Pickett’s referring to. But it sounds like what he took watching tape translated to the field and put Pittsburgh in the end zone for their first touchdown of the game.

“We liked George inside,” Pickett explained of the score. “Had [Diontae Johnson] on the outside there, put Pat at number three so that backside safety, he did exactly what we saw on tape. So it’s pretty cool when you put something in like that, you get a call perfectly and in the right situation for a touchdown. It’s awesome.”

Pickens has been moved around as the season’s gone along, a testament to his growth and development. Like his game-winner versus the Las Vegas Raiders, it came from the slot and Pickett found him for the score.

Sunday wasn’t Pickett’s best performance and a step backwards from what he did in Week 17 against the Baltimore Ravens. He was hurt by a couple of Diontae Johnson drops but still finished the game going just 13/29 for 195 yards, that touchdown, and zero picks. Pickett repeatedly missed high over the middle of the field and the Steelers’ red zone struggles were again a problem, going just 2-4 inside the 20.

But Pickett also made a couple of impressive plays early in the game, making plays outside of structure while pushing the ball downfield, finding Pickens on backshoulder throws and Connor Heyward down the seam for a late and important third down conversion. His play was improved and his football IQ has grown too, now taking an active role in the gameplan and sharing of ideas of what could work, then seeing them pay off on gameday.

Pickett and Pickens will enter their sophomore years next season with lots of growth and confidence. The offense will be partially built around them as they look to pick up where the offense left off in 2023. If they can just finish 20% more of their drives, they’ll become an effective offense.