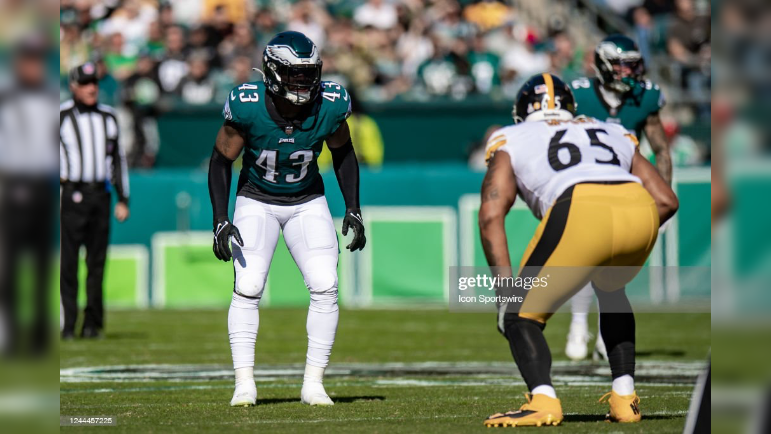 There were some high hopes for the inside linebacker room of the Pittsburgh Steelers entering the 2022 season, in large part due to the acquisition of veteran Myles Jack in free agency, and the surprising hiring of Brian Flores as the Senior Defensive Assistant/LB coach.

At times, the group flashed signs of high-level play overall, but too often Jack, Devin Bush, and Robert Spillane were far too inconsistent.

Entering the offseason, the position remains a glaring hole once again, much as it seemingly has been for the black and gold since Ryan Shazier’s tragic injury in 2017.

Good news for the Steelers though is that it’s a pretty deep, talented crop of free agents at the inside linebacker position, which will give new GM Omar Khan and assistant GM Andy Weidl plenty of options to choose from.

Pro Football Focus’ Brad Spielberger tried to make it a bit easier on Khan and Weidl though, highlighting Philadelphia Eagles’ linebacker Kyzir White as the defensive piece the Steelers should pursue in free agency once the new league year opens in mid-March.

“If Myles Jack returns for Pittsburgh in 2023, which is no certainty, he pairs well with White as a 250-pound, big-bodied linebacker who, at this stage in his career, shouldn’t be relied upon to cover,” Spielberger writes regarding the potential pairing of White and Jack in Pittsburgh. “White, on the other hand, is a great coverage linebacker in the modern NFL, matching up well with opposing running backs and tight ends, posting 60.0-plus coverage grades in every season of his career thus far. He’s not just a coverage backer though, demonstrating solid three-down ability with 181 tackles and 99 defensive stops over the last two seasons.”

White, a fourth-round pick out of West Virginia in 2018 by the then-San Diego Chargers, eventually made the move from safety to linebacker and flourished in the box. In four seasons with the Chargers, White recorded 288 tackles, 1.5 sacks and four interceptions, including a career-high 144 tackles in 2021 along with two interceptions, eventually leading to a one-year deal with the Philadelphia Eagles in free agency.

Would guess one of these four guys will be a new ILB for the #Steelers this offseason.

Ranking them in order of likelihood:

At 6-foot-2, 234 pounds, White certainly has the size, and as a former safety has the athleticism and coverage abilities to be the answer for the Steelers on the inside next to Jack. According to Pro Football Focus, White graded out at a 64.3 overall on the season, including a 63.9 against the run and a 62.0 in coverage. Those numbers are right in line with his career numbers overall, having played 2,874 snaps in the NFL to date.

With Weidl in Pittsburgh now in the front office, the familiarity is there, as is the close proximity White had in college at WVU. Though he wasn’t a top 30 pre-draft visitor in 2018, he was a local visit to the South Side facility as WVU is considered an area school, so the Steelers did their due diligence on him.

The fifth-year pro, who has already gone through free agency once, won’t be the only inside linebacker the Steelers could have eyes on in free agency. Dallas’ Leighton Vander Esch is set to hit free agency, and he was a pre-draft visitor and had a Pro Day dinner with current Steelers inside linebacker coach Jerry Olsavsky in 2018.

KYZIR WHITE with the play

Germaine Pratt is an NC State product who played on the team when offensive coordinator Matt Canada and running backs coach Eddie Faulker were on the staff, not to mention Pratt being in the AFC North the last four years.

Edwards also makes sense due to the ties to Weidl, while New York Jets’ linebacker Quincy Williams, Tennessee’s David Long Jr. and Buffalo’s Tremaine Edmunds are names to watch, too, based on pre-draft history with the trio.

White is the name PFF has circled for the Steelers though. It will be interesting to see how things play out in free agency at one of the most important positions on the Steelers’ defense.