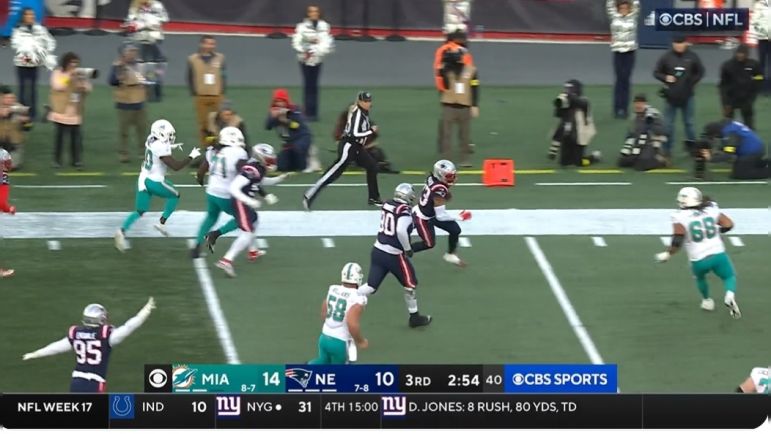 It’s a rare sentence to say in Pittsburgh but for the first day of the new year, it’s true.

In a can’t-win game for the Miami Dolphins, the Patriots knocked off the Dolphins 23-21 Sunday afternoon, meaning the Steelers are still mathematically alive for postseason play.

It wasn’t the prettiest affair but the 7-8 Patriots earned a victory they desperately needed, too. Safety Kyle Duggar provided the big swing in the game, pick-sixing QB Teddy Bridgewater to put the Patriots up 16-10 late in the third quarter.

.@Patriots take the lead on a pick-6!

On the same play, QB Teddy Bridgewater injured his hand and did not return to the game, pressing third-stringer Skylar Thompson into action. For the Pats, QB Mac Jones made key throws on third down and took care of the ball, New England winning the turnover battle on the day. Miami’s losing streak continues and they’re in serious danger of missing the playoffs after starting the year 8-3.

Now, attention turns to the mid-afternoon game between the Seattle Seahawks and New York Jets. Regardless of outcome, the Steelers can’t be eliminated by the result here but a Seahawks win would be far better than a Jets’ victory. If the Jets win, they’ll need to tie the Dolphins next week. That game just got underway with Seattle taking an early 7-0 lead.

Despite the favorable outcome, Pittsburgh must still take care of business tonight. If they lose to the Baltimore Ravens, they will be eliminated from playoff contention. Pittsburgh needs to win out over the final two weeks against the Ravens and Cleveland Browns. Pittsburgh will continue to need more help, including the Dolphins losing or tying their regular season finale to the New York Jets while the Patriots must lose (or tie) against the Buffalo Bills next weekend.