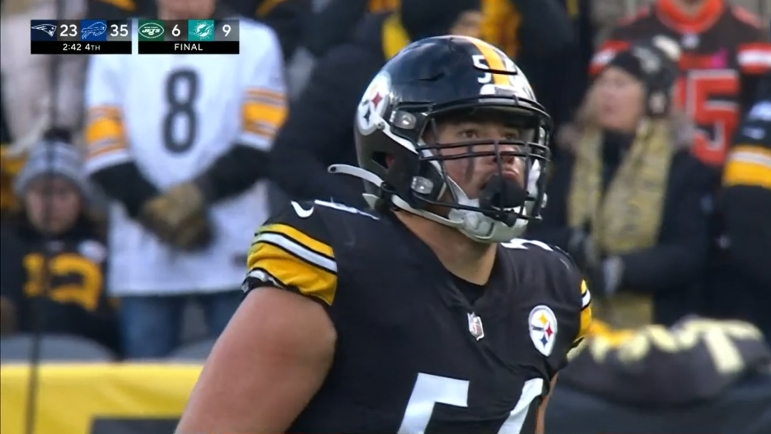 Pittsburgh Steelers OLB Alex Highsmith had himself quite the 2022 season. In just his third year in the league after being drafted in the third round of the 2020 NFL Draft out of Charlotte, Highsmith broke out to the tune of 63 total tackles (38 solo), 12 TFLs, 14.5 sacks, five forced fumbles, and a pass deflection in 17 games played. He made good on his goal of hitting double-digit sacks this season, more than doubling the six sacks he had back in 2021 as he took the next step as a legitimate NFL pass rusher.

Alex Highsmith (@highsmith34) with the beautiful ghost rush for the sack. Does a great job getting under the blocker’s punch! #passrush #steelers pic.twitter.com/k5J95UCZpF

Highsmith spoke to the media Monday following Pittsburgh’s regular season finale against the Cleveland Browns where they secured the victory but got eliminated from the playoffs due to the Miami Dolphins beating the New York Jets. Knowing that he will be a free agent after the 2023 season, Highsmith is appreciative of the season that he had this year in hopes that he will be rewarded a contract extension at some point this offseason. He was asked about a possible contract extension by the media and what support players like Diontae Johnson and Minkah Fitzpatrick can be for him as they cashed in this past offseason on multi-year contract extensions of their own.

“It helps some, you know, just kind of to see how they handled it and everything like that,” Highsmith said to the media Monday on video from Chris Adamski’s Twitter page. “Just thankful for the journey that I’ve had so far and just being able to take another step this year in my third year. So, I’m just really excited… just grateful to just be able to have this opportunity to be where I am. I’m just really thankful.”

Alex Highsmith on entering an off-season when he’s due a contract extension, like Minkah Fitzpatrick and Diontae Johnson last year pic.twitter.com/Xv7tD5CKZV

Highsmith has more than earned a lucrative contract extension this offseason after leading the team in sacks and forced fumbles, stepping up in a big way while fellow OLB T.J. Watt had a statically down year in 2022 after missing some time with a pec injury that landed him on IR. He has become the ideal running mate opposite Watt for a Steelers defense that can excel at getting after the QB, finishing the season on a high note with seven sacks against the Browns on Sunday.

Most sacks by a Steeler over his first three years (since 1982):

Steelers' current starting OLBs in two of the top three spots. Future of the team's pass rush is in good hands. #Steelers

Alex Highsmith has made himself into a Pro Bowl-caliber player for the Pittsburgh Steelers and should be compensated as such. We saw S Minkah Fitzpatrick sign early in the summer after a brief “hold in” during OTAs while he and the Steelers worked out a long-term extension. The same was the case for WR Diontae Johnson who initially held in during training camp before coming to terms on a two-year extension. It’s plausible we see a similar path for Highsmith occurring this offseason as he looks to cash in after a breakout performance with a timeline of a potential deal getting done possibly occurring anywhere from mid-June to the end of July and into August when the Steelers report for training camp.