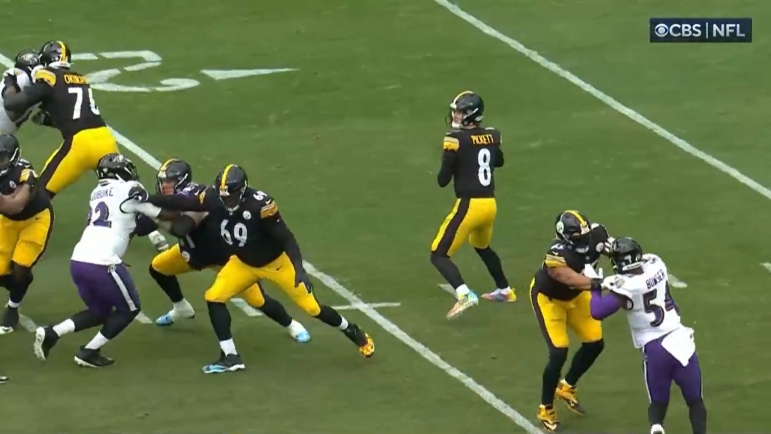 I imagine the Pittsburgh Steelers would still like to say that they never rebuild, they only reload, but the 2022 season is probably the closest they’ve come to anything resembling a rebuild in the Kevin Colbert era. At least the past two seasons, which has seen the offense turn over dramatically.

The offensive line has been one of the biggest areas of change, including two changes at offensive line coach. They invested in the position in free agency by signing right guard James Daniels and center Mason Cole, though tackles Chukwuma Okorafor and Dan Moore Jr. (a 2021 draft pick) retained their starting jobs, as did left guard Kevin Dotson, who entered the lineup in 2021.

It was a process, but the unit has grown steadily over the course of the year. “It seems like the questions have gotten easier as the season’s gone on”, Cole deadpanned during his acceptance of an award acknowledging his good relationship with the media. “Obviously the first half of the season didn’t go as we wants. It’s your guys’ job to ask the hard questions and it’s our job to answer it as best as we can. But as things go well, I hope you guys ask the easy questions too”.

The offensive line was not playing well at all at the start of the year, though all the new parts and injuries being dealt with from the likes of starting running back Najee Harris didn’t help matters, either. Those on the outside were very concerned about the line coming out of the preseason, but Cole suggests it was nothing like that in that room.

“There was never a time of panic for us”, he said via the team’s website. “Even through the ups and downs, especially early in the season, there was still never panic. We always knew the quality of guys we had in there. We had all the trust in Pat Meyer to get us going in the right direction, and he has. We just kept putting our heads down, kept getting back to work, and finally things started to sort of go our way”.

Perhaps not many would put the Steelers’ line in the top 10 groups in the league, but they have certainly come together, especially since the bye week. They are on the cusp of eclipsing 2000 rushing yards as a team on the season, and 1170 of that has come in the eight games played since the bye, averaging 146.25 rushing yards per game since then. That would rank seventh in the NFL over the full season.

The big thing when it comes to Meyer is that he came in with a coaching and instruction philosophy that is not compatible with what the Steelers’ recent offensive line coaches have asked their linemen to do, particularly when you get down to specific techniques.

That was one of the many hurdles the linemen had to adjust to, especially those who were on the roster the previous season, having to unlearn old habits and embed the new ones into your mind. That takes repetition, and that comes with playing.

Now the question is, what is this group’s ceiling? I certainly don’t think the team would shy away from drafting linemen high in the draft or adding more via free agency. Especially given that they have a new front office who didn’t have much of a hand in putting together this roster.