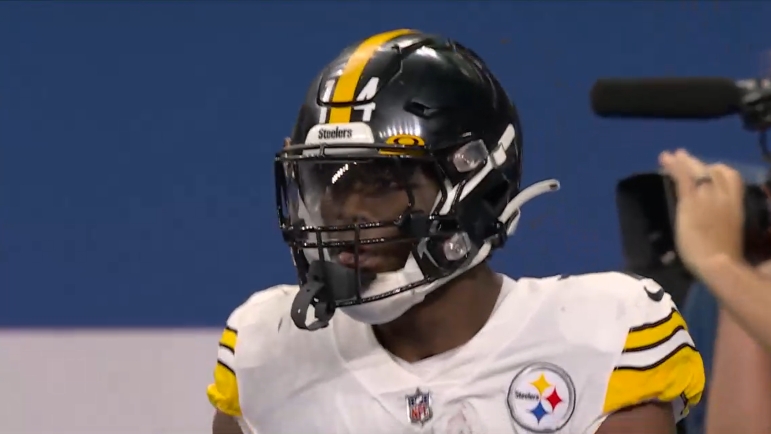 No Pittsburgh Steelers made the Pro Football Writers of America All-Rookie team. The publication posted its 2022 squad and no Steelers, not QB Kenny Pickett nor WR George Pickens, made the list.

Here’s a look at the complete All-Rookie team.

No Steelers on the 2022 PFWA ALL-ROOKIE TEAM. #Steelers #NFL pic.twitter.com/qJ2iERw7wI

San Francisco 49ers’ quarterback Brock Purdy beat out Kenny Pickett. The last pick of the 2022 NFL Draft, Purdy took over midseason following injuries to Trey Lance and Jimmy Garoppolo. Benefitting from a solid run game and top defense, Purdy has played well, throwing 13 touchdowns to just four interceptions while completing over 67% of his passes. His 49ers are now in this upcoming weekend’s NFC Championship Game against the Philadelphia Eagles. Pickett played well down the stretch and showed a promising future but still ended the year with more interceptions than touchdowns, making Purdy the more attractive choice in the voter’s eyes.

Pickens lost out to New Orleans’ Chris Olave and New York’s Garrett Wilson. Olave posted a 72/1042/4 line while Wilson had a 83/1103/4 rookie campaign. 2022 offered no clear frontrunner for the offensive award. Without a top quarterback or running back who started from Day One, the award was certainly up for debate. Olave and Wilson were worthy as was Seattle Seahawks’ RB Kenneth Walker, who rushed for over 1000 yards despite not seeing a regular role until Week 5. Even Purdy could’ve garnered votes given the expectations he’s so clearly exceeded.

We’ll see if the official Rookie of the Year votes follow suit. Those will be announced next month.