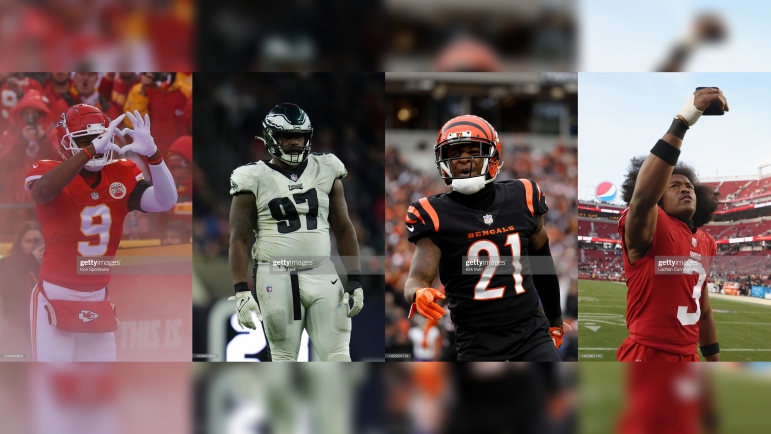 Only four teams remain in contention for the Super Bowl this season following the divisional round games this past weekend. The Pittsburgh Steelers might long ago have been eliminated, but no matter who hoists the Lombardi Trophy this year, at least one former Steeler will be a part of it, including some quite notable ones.

Arguably the most prominent is former wide receiver JuJu Smith-Schuster, a 2017 second-round pick who played his first five seasons here, reportedly turning down more money in 2021 in free agency to sign a one-year deal and finish out Ben Roethlisberger’s career.

Smith-Schuster accepted a one-year deal with the Kansas City Chiefs to get a fresh start, a deal that included a lot of incentives the Steelers wouldn’t match, and he’s had a successful beginning to his redemption story. Although he’s not lit up the numbers in the postseason so far, he caught 78 passes for 933 yards and three touchdowns in one of the most versatile offenses in the league.

The Chiefs will be hosting the Cincinnati Bengals for the second year in a row in the AFC championship game, and that means another postseason run for former Steelers fan favorite Mike Hilton. The aggressive little cornerback has brought his Pittsburgh style of play with him and has been an impactful player for his former division rivals. He had eight tackles, a tackle for loss, two hits, and a pass defensed against the Bills.

Flipping over to the NFC, the top-seeded Philadelphia Eagles feature former third-round defensive tackle Javon Hargrave, who was a Pro Bowl snub this year after finishing with a career-high 11 sacks (two against his former team). He is the only one on this list to have been a part of a Steelers postseason win before, on the 2016 team that reached the conference final.

Last is the San Francisco 49ers, who signed wide receiver and return man Ray-Ray McCloud as an unrestricted free agent this offseason. The least distinguished member of this list, he was not a big part of San Francisco’s offense, but he had arguably his best season as a return man, averaging nearly 11 yards per punt return and 23 per kick return. He also had a career-high 321 yards from scrimmage, including a 71-yard touchdown run. He scored the first two touchdowns of his career in 2022.

For Smith-Schuster and McCloud, they both also got their first taste of postseason success. Hargrave, as mentioned, won a couple of games with the Steelers when he was a rookie. Hilton was in the Super Bowl just last year with the Bengals. One of them, however—only one of them—will be earning a ring in a few weeks.

Regardless of the teams that they play for, of the four players in question, which of them would you most like to see get their Super Bowl ring? It can be for whatever your personal reason is, including the likelihood of them having another shot at a ring in the future.

There are some other players on these rosters with Steelers ties, some rather minimal. Perhaps the most notable is kicker Matthew Wright, who is on the Chiefs’ practice squad with Steelers 2022 seventh-round pick Chris Oladokun. Wright kicked in several games over the years, but is the backup to Harrison Butker. Former offensive linemen also find their way to practice squads, with Fred Johnson on the Eagles, and Nate Gilliam on the Bengals. If I’ve missed any other players who have logged time with the team in the past, I apologize.