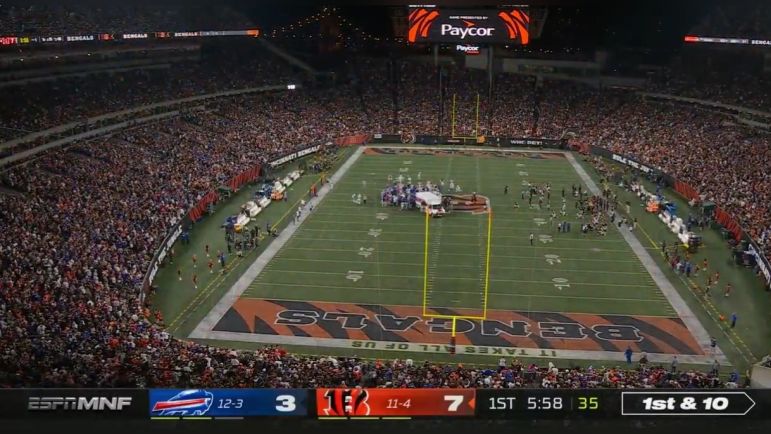 The NFL has announced Monday night’s suspended game between the Cincinnati Bengals and Buffalo Bills will not resume this week.

Here’s what the league announced moments ago via ESPN’s Adam Schefter.

The statement reads the league has not decided when the game will be played other than the fact it won’t take place this week. The NFL has also announced there’s no current changes to the league’s Week 18 schedule.

Commissioner Roger Goodell has issued the following statement to all 32 clubs with similar information contained in the league’s statement above. It does note the league is providing additional mental health assistance to any player around the league who needs it.

Last night’s game was suspended after Bills’ safety Damar Hamlin collapsed after making a tackle with 5:58 left in the first quarter. Hamlin was administered CPR and an AED device was used to restart his heart and he was transported to a nearby hospital that has a Level One Trauma Center. In a statement released by the Bills’ team moments ago, Hamlin spent last night in the ICU and remains there now. He is still in critical condition.

Buffalo players returned to Orchard Park Monday night/Tuesday morning, the first indication the game wouldn’t take place anytime soon. The Bills are slated to play the New England Patriots this Sunday at 1 PM/EST, a game important to the Steelers’ playoff chances, but it’s unclear if that game will be impacted. Of course, all of that is secondary to Hamlin’s health and it’s certainly possible the NFL doesn’t make any final determinations over the schedule until Hamlin’s condition is better known.