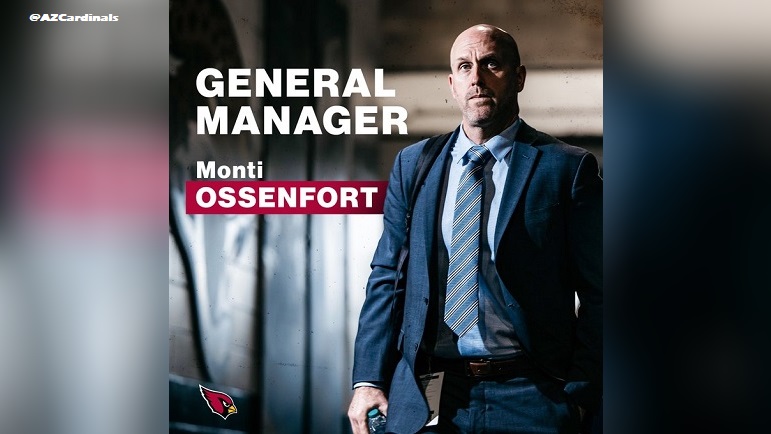 The Arizona Cardinals now have their new general manager in place as of Monday afternoon and it’s Monti Ossenfort, who was most recently the Director of player personnel with the Tennessee Titans.

Welcome to the Valley Monti 🏜 pic.twitter.com/MAiKLUhHsa

Ossenfort’s NFL history prior to the Titans includes him having a link to Pittsburgh Steelers linebackers coach Brian Flores, who is reportedly going to interview with the Cardinals soon for their vacant head coaching job.

Ossenfort was with the New England Patriots starting in 2003 as a personnel assistant. He left and came back in 2006 through 2019 and he moved up the ladder with them. He started as an area scout with the Patriots in his second stint with them and ended his time with the organization as their Director of College Scouting.

Flores was with the Patriots from 2004 through 2018 and that meant he was obviously with the organization for a good chunk of the time that Ossenfort was there. Flores left the Patriots in 2019 to become the head coach of the Miami Dolphins.

According to NFL insider Ian Rapoport a few days ago, the Cardinals requested permission to interview Flores.

Flores talked about Ossenfort during a 2021 press conference when he was with the Dolphins.

“I think they’ve got a lot of guys on their staff who I’ve worked with,” Flores revealed in December of 2021. “Jon Robinson, their general manager. [Director of Player Personnel] Monti Ossenfort, who is a guy that I kind of came up with in the scouting game. [Vice President of Player Personnel] Ryan Cowden. There are a lot of relationships there with the Titans. I think they’ve done a lot of really good things over there building a team, building the culture. A lot of things that we would like to emulate.”

Flores seems to be in demand this offseason as part of the interview process and especially when it comes to open defensive coordinator jobs around the league. His link to Ossenfort is quite an interesting one and it can’t be ignored.

After Flores was fired by the Dolphins after the 2022 season, the Steelers hired Flores last February to be their senior defensive assistant. He is currently suing the NFL for racial bias in the league’s hiring practices.

From NFL Now: The #AZCardinals have a new GM in Monti Ossenfort and now their attention turns to the coach. pic.twitter.com/y97O9i0vc9