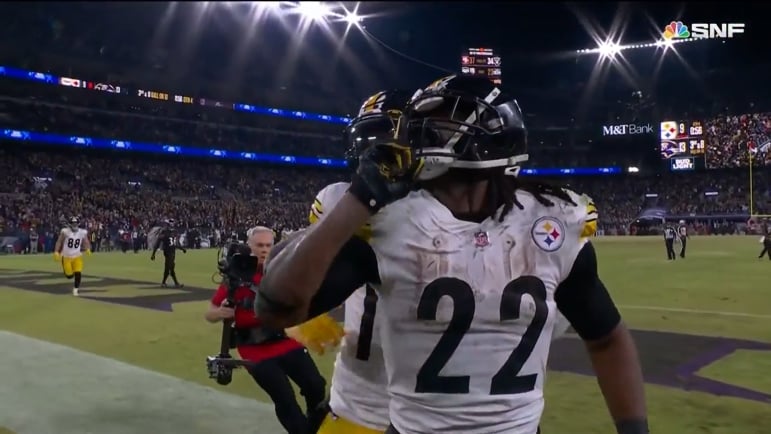 Every division has its rivals, but few rivalries in the NFL today perhaps live up to the type of product and environment that the Pittsburgh Steelers and the Baltimore Ravens deliver on a consistent basis. So many of their games end up going down to the wire in single-possession games, often decided by a field goal or less.

Last night’s game was no different. Running back Najee Harris scored the game-winning touchdown on a pass from quarterback Kenny Pickett with 56 seconds to play. And then he had a little moment with the Ravens fans in attendance near that end zone.

On scoring, and the fan interception, he said, “It felt really good. Did y’all get the part where I grabbed the flag? All good, but if y’all find that, give it to me”, via the team’s website. “It was good to come in here and win. It’s obviously a tough environment, the rivalry is there. To come in there and talk a little shit is always good”.

Najee Harris after his TD. Hang it in the Louvre! lol @ohthatsNajee22 #Steelers #NFL pic.twitter.com/BXgScf2cFi

The Steelers were not penalized for any of the post-play celebrations following Harris’ touchdown, so it does not appear that they committed any infractions, but it sure was a moment worth celebrating for a team that has scraped and clawed its way back to relevance over the course of the past two months.

And to do in Baltimore as well is something special, especially after having lost to them earlier in the year in a game that could be attributed to failure to overcome some self-inflicted wounds, though the Ravens knocking Pickett out of the game early was a big factor as well.

The Steelers have now won three consecutive games in Baltimore going back to the 2020 season. They beat the Ravens in Baltimore 16-13 last season, the same as last night’s score, and in the year before that, by a 28-24 margin. They’ve won five of the last six in Baltimore after losing four in a row.

The longest away winning streak, however, was from 1997 through 2002. The Steelers won six consecutive games in Baltimore in those years, the pre-Ben Roethlisberger era, and that includes the Ravens’ Super Bowl season of 2000, a 9-6 slugfest. Baltimore’s longest win streak in Pittsburgh was a three-year run from 1999 to 2001. They’ve never won more than two consecutive games in Pittsburgh before or since.

Even for the Steelers, granted, this is only their second-ever road winning streak in the series of greater than two games. The rivalry only goes back to 1996 when the old Cleveland Browns relocated and changed the team name, but it’s still notable that both teams have found it rather difficult to succeed unless as host.

As for the 2022 season, the Ravens have already locked up a postseason berth. If the Cincinnati Bengals lose to the Buffalo Bills tonight, then the Ravens and Bengals will play for the AFC North crown in Week 18. Pittsburgh can still get into the postseason with a win in the finale paired with a New England Patriots loss to Buffalo and a Miami Dolphins loss to or tie with the New York Jets.