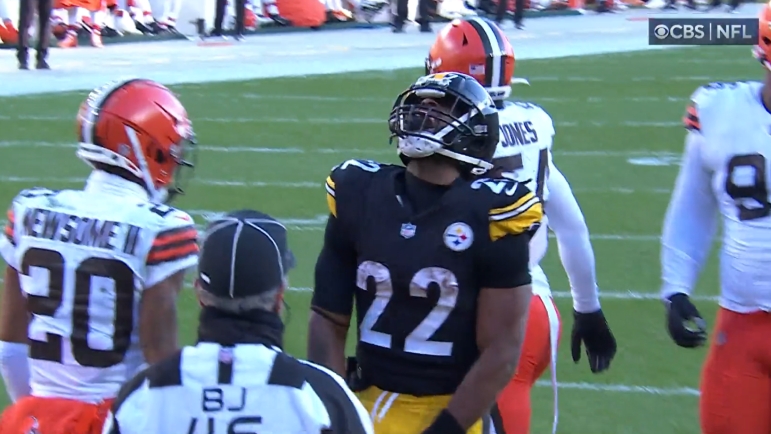 The 2022 season did not get off to a good start for second-year Pittsburgh Steelers running back Najee Harris.

Hurt on the first day of padded practice on one of the first reps of the team session at St. Vincent College in Latrobe, Harris missed a chunk of time in the team-building portion of training camp, and then played very few snaps in preseason in the finale against the Detroit Lions.

Rather rusty and still dealing with a LisFranc injury to his foot, Harris stumbled out of the gates, looking rather slow, indecisive and — in general — a below-average running back, which he certainly is not.

Add in the fact that he was trying to learn a new offensive line’s blocking style on the fly and it was a tumultuous start to the season, one that had fans and some media members calling for him to be benched for rookie undrafted free agent Jaylen Warren.

Then, the Week 9 bye week arrived and things completely changed for Harris and the Steelers’ run game overall. Harris took off in the second half of the season, which coincided with the Steelers going 7-2 down the stretch.

Down the stretch, Harris rushed for 677 of his 1,038 yards on the season after the Week 9 bye on 164 carries, scoring six touchdowns in the process. Based on those numbers, Harris averaged 4.13 yards per carry after the bye week, helping the Steelers average 146 yards per game on the ground, good for seventh in the league. Prior to the bye week, the Steelers averaged 94.9 rush yards per game, which was 25th in the NFL.

Those numbers were ultimately good enough to elevate Harris inside of former 9-year NFL running back and current NFL Network analyst Maurice Jones-Drew’s top 15 RB rankings on NFL.com Tuesday evening, coming in at No. 14, right in between Seattle rookie Kenneth Walker III at No. 15 and New Orleans veteran Alvin Kamara at No. 13.

“Harris quietly had another productive campaign during an up-and-down Steelers season, racking up his second straight 1,000-yard effort, thanks to an 84-yard, one-TD line in Sunday’s win over Cleveland,” Jones-Drew writes regarding Harris’ ranking. “With 2,238 career rush yards, Harris passed Le’Veon Bell (2,221) for the most rush yards in a player’s first two seasons in franchise history. Pittsburgh’s young offensive core — with Harris, QB Kenny Pickett and WR George Pickens — is going to be one to watch next season.”

The season-ending numbers were rather productive overall — 272 carries, 1,038 rushing yards, seven touchdowns; 41 receptions, 229 yards, three touchdowns — and showed that Harris isn’t a bust or Trent Richardson 2.0, like many people within the fanbase and even in the vocal media were stating during his slow start.

Once he shed the metal plate in his cleat and started to really get familiar with the offensive line, Harris took off.

He was critical of himself entering the bye week, stating that he was the one that needed to play better, not the offensive line. He backed up those words — and then some — in the second half of the season, eventually eclipsing 1,000 yards for the second straight season, making Steelers history in the process.

Harris showed late in the season that though he won’t consistently rip off those 20+ yard explosive runs, he can be an absolute battering ram between the tackles, consistently forcing defenders to miss, running through tackle attempts and causing the pile to fall forward over and over again.

He fits into the Steelers’ style perfectly. Hopefully his strong close to the regular season in the second half is a springboard into his third season overall.