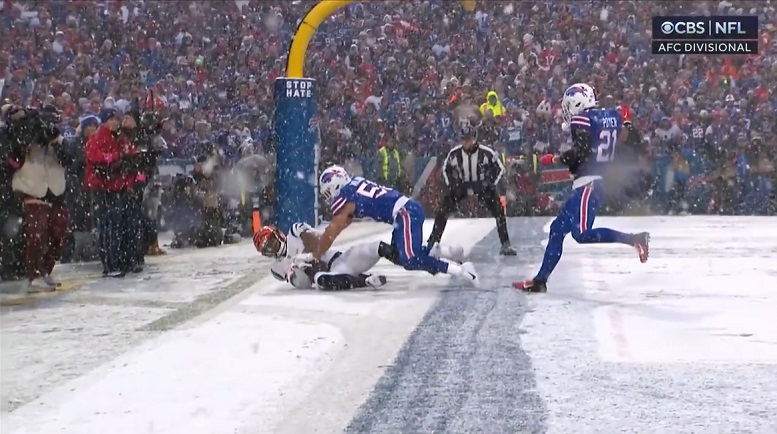 The Pittsburgh Steelers are all but too familiar with controversial calls on catches. The Jesse James non-catch ruling in 2017 potentially cost that team a first-round bye, and led head coach Mike Tomlin to call for the NFL competition committee to revisit the catch, as well as NFL commissioner Roger Goodell stating that the league would focus on adjusting the catch rules.

Here’s the full explanation on the call in the Pats/Steelers game from NFL SVP of officiating Al Riveron. pic.twitter.com/EXSQM6ssvo

Fast forward nearly five years, there is yet another controversy surrounding the overturning of a catch in the end zone, this time in a crucial playoff game. In a game between the Steelers’ AFC North Rival Cincinnati Bengals and the Buffalo Bills on Sunday, Cincinnati receiver Jamarr Chase seemingly scored a touchdown on third and goal. That is, until the play was reviewed and overturned, leading the Bengals to settle for a field goal and a 17-7 lead rather than potentially 24-7.

Good on Milano playing down through the catch point pic.twitter.com/JyVL5VItjA

Afterwards, many in the NFL world expressed their frustration with the ruling, including the Steelers’ own running back Najee Harris on Twitter. The fact that Harris is taking this stance for a divisional rival speaks volumes about how strong players feel about this.

Horrible call give that man his td smh

As an offensive player, it only makes sense that Harris is not pleased with the ruling. Indeed, that overruling arguably does not take place in a regular season game, as playoff games are often officiated differently. The fact is, officiating can win or lose a game, and is especially costly in big games such as the aforementioned 2017 Steelers’ game and the Bills vs Bengals divisional round game.

The exact NFL rules on a catch are unclear. Chase arguably met the criteria, holding onto the ball with two feet in, of a catch, and it would not have been shocking to see the touchdown count by the NFL’s standards. Back in 2017, Steelers’ former tight end Jesse James referenced a different catch by fellow tight end Xavier Grimble that did count, further highlighting the league’s inconsistency.

On one hand, the ruling is head-scratching for more than a few reasons, and begs the questions of whether officiating is different in the playoffs. On the other, there is a tangible explanation for the contrary, as Tony Romo explained on the broadcast. Either way, the fact remains that the catch rules are not clear enough to have a consensus.

So, is Harris right?

In #CINvsBUF the ruling on the field was a touchdown. After review, CIN #1 does not maintain control of the ball throughout the process. Therefore, the result is an incomplete pass. pic.twitter.com/GUT1V63Cba