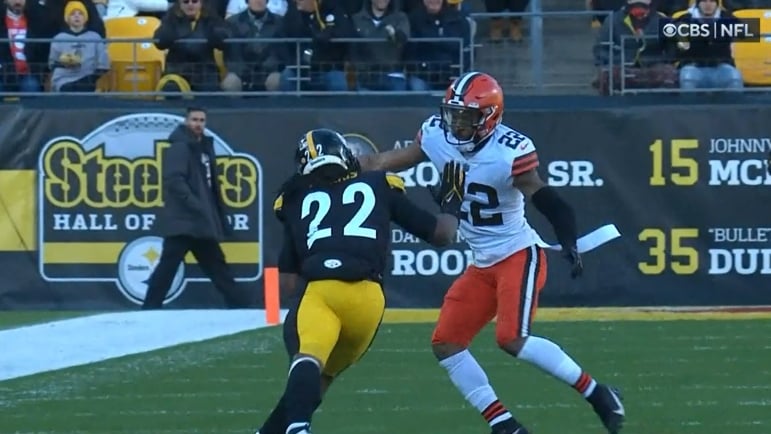 Pittsburgh Steelers running back Najee Harris had a season-best game last time out with 111 yards rushing, as well as the game-winning touchdown reception. The big day put him 46 yards shy of 1000 yards on the ground for the season, which he needed today to hit the mark for the year.

He did just that, and in doing so became the first Steelers running back in team history to rush for 1000 or more yards in each of his first two seasons. Franco Harris didn’t do it. Le’Veon Bell didn’t do it. Jerome Bettis did…but he was not a Steeler at the time, as you might recall.

Najee Harris over 1000 yards this season.

He's the first player in Steelers' history with 1000+ yard rushing campaigns in his first two years.

A first-round draft pick in 2021, Harris recorded 1200 rushing yards as a rookie last season, in the process setting a team rookie record for yards from scrimmage with 1667 yards. His second season proved to be more trying early on, largely due to the fact that he was playing with a Lisfranc foot injury, but his second half of the season has been much smoother.

Harris only had 361 rushing yards at the halfway point of the season on 108 attempts, averaging just 3.3 yards per attempt. In the past eight games, he has rushed for 593 yards on 141 attempts, along with five of his six rushing touchdowns on the year (and six of his nine total touchdowns).

Had he been able to put up the numbers he has had in the past eight games all season, he would have paced for 1260 rushing yards on 300 attempts with 11 rushing touchdowns, averaging just over 4.2 yards per carry.

Although they moved away from the run game for most of the first half, once they took the lead, they were able to open the second on the ground. It didn’t take long after that for Harris to pick up the yardage needed to cross the 1000-yard mark, hitting 50 yards on 14 attempts by the end of the opening drive.

The one element of his game that has continued to elude him, of course, has been the explosive plays. He entered the day with just one single rush of 20-plus yards, breaking off a 36-yard run back in week 10 against the New Orleans Saints. He also has only six additional rushes of 15-plus yards.

That, frankly, only makes it all the more remarkable that he has managed to improve his season rushing average by half a yard, from 3.3 to 3.8. He finished his rookie season with a 3.9-yard average, which also benefited from a second-half improvement.

1000 rushing yards may no longer seem all that special for a running back, but for the season Harris has had, from where to started to where it’s ending, it’s certainly a notable achievement. Especially since nobody in team history has ever done it before.