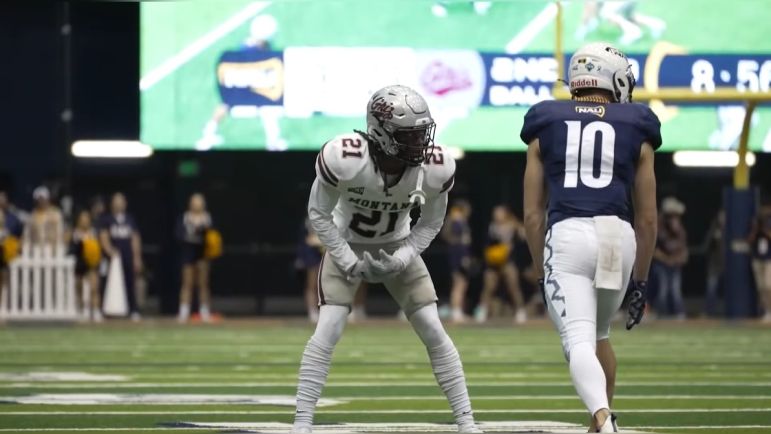 Draft season has officially begun. Mock drafts, player profiles, and yes, we’re keeping tabs on who the Steelers are talking to this time of year. Like every team, Pittsburgh casts a wide net when it comes to the draft, talking and meeting with hundreds of players from now until draft day. But we’re nothing if not thorough and according to Draft Network’s Ryan Fowler, Montana CB Justin Ford met with the Steelers during this year’s Hula Bowl.

CB Justin Ford (Montana) met with a long list of teams at the Hula Bowl including the Steelers, Eagles, Bills, and Bears, per source.

A transfer from Louisville, Ford led CFB in INTs in '21 (9) and remains one of the top FCS DBs in the class.

As Fowler notes, Ford briefly played at the FBS level with Louisville. He appeared in one game, a 2019 contest against Virginia, but recorded no stats. A three-star recruit, he began playing college ball at Golden West Community College, spending two seasons there and picking off three passes in 2018 before transferring to Louisville. His time spent there was short and he transferred to Montana during the summer of 2020.

After playing in just two games that year, he became a starter in 2021 and exploded, leading college football with nine picks across 13 games. He also chipped in 41 tackles (two for a loss) with a sack and forced fumble. He also broke up an impressive 20 passes and scored three touchdowns that year, two pick-sixes, and returning a blocked field goal for a score.

His 2022 stats were down, with two interceptions in eight games, but he’s proven to be a playmaker and appears to have good size at a listed 6’2, 200 pounds.

#P6SProspectWatch
Justin Ford CB, Montana a ball hawk, has that knack to be where the ball is. He has quick feet, football IQ, instincts/awareness, ball skills & physicality. Shows nice burst to get downhill to break on passes and make tkls.@Pick6Sports1 #NFLDraft pic.twitter.com/yLVUImhexN

The Louisville-to-Montana journey isn’t a common one but Ford had a relationship with the Grizzlies staff and liked the feel of playing out west, a mentality that would fit well in Pittsburgh.

“I had already talked to Montana previously so I knew it’s a blue-collar mentality here and that’s kind of what I present,” he told Montana Sports in September of 2021.

He’s reportedly a big hitter in addition to being a playmaker. If he tests well, he could become a name to know on Day Three of this year’s draft. Ford nearly declared for the 2022 NFL Draft but opted to return to Montana and put more tape on his resume. Look for a Depot profile on Ford later in draft season.

Pittsburgh could look for cornerback depth in the draft. Cam Sutton is a pending free agent while Ahekllo Witherspoon is a cap casualty candidate. James Pierre is also a restricted free agent and the Steelers lack up-and-comers on rookie deals in their room. They haven’t drafted a true CB since Justin Layne, the team’s third-round pick in 2019. Since, Tre Norwood and Antoine Brooks were selected but they were hybrid types who functioned more as safeties than true corners.