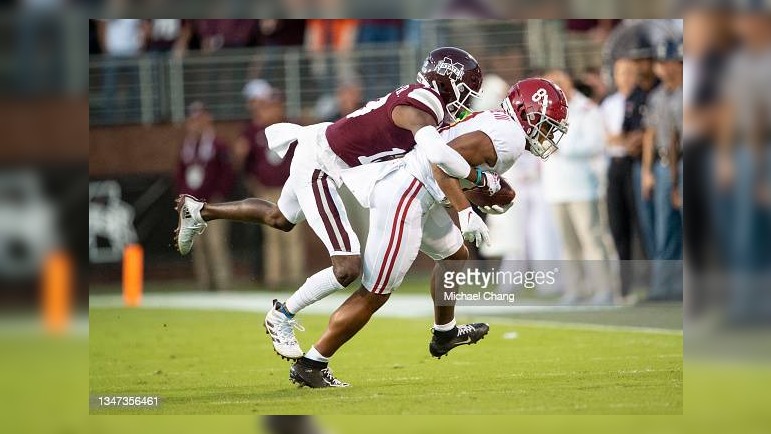 The Pittsburgh Steelers’ 2022 season is officially in the books with the team finishing with an 9-8 record but failing to make the playoffs. With the season now in the rearview mirror, many will turn their attention toward the offseason and more specifically the 2023 NFL Draft. Now that Pittsburgh has officially been eliminated from playoff contention, they are slotted to pick 17th overall in the first round and own the top pick in the second round thanks to the Chase Claypool trade with the Chicago Bears.

While we still have the all-star games, NFL Combine, and Pro Day upcoming prior to the draft this spring, it’s never too early to go through mock draft scenarios and project player/prospect fits who the Steelers may be interested in given their current needs on the roster and the talent in this upcoming draft class.

Analysis: The Pittsburgh Steelers could be in the market for an offensive tackle early in the 2023 NFL Draft should they decide to pull the plug on Dan Moore Jr. being the LT of the future for the team after the 2022 season. The same could be said for LG with Kevin Dotson’s future up in the air as a pending free agent after the 2023 season. Northwestern OL Peter Skoronski lacks ideal length and size, but is one of the most technically sound offensive linemen in this draft class, mirroring pass rushers with ease while playing with great base and effort as a run blocker.

While Skoronski may be listed as a tackle, many scouts and teams in the league are viewing him as a potential guard at the next level that can kick inside and provide a team a quality player there for the next decade. He may need some more work in the weight room to hone in his battles versus power, but Peter Skoronski should be a name Pittsburgh sees as an answer when looking as a potential solution to either LT or LG with the capability to play both positions at the next level.

Arm length will push Peter Skoronski inside to G/C for several NFL teams. But the tape shows a blocker with the talent to potentially overcome his lack of length at LT.

A dozen NFL prospect outliers who might be the exceptions: https://t.co/Ak3grlcuui pic.twitter.com/9JFjjhCDm4

Analysis: The Steelers are in dire need of a capable pass rusher to rotate in with T.J. Watt and Alex Highsmith throughout the game while also needing a suitable backup should Watt or Highsmith go down. This pick could be a valuable trade chip at the beginning of Day Two, but instead, the Steelers use this luxury selection to take on of the best overall prospect left on the board in LSU EDGE BJ Ojulari.

The 6’3, 250lb junior is following in his brother Azeez’s footsteps as a talented pass rusher looking to make his transition from college to the pros. He posted only 5.5 sacks and one forced fumble this season, but he has shown phenomenal pursuit of the football combined with the bend and hand usage you want in an NFL pass rusher. He can stand to get a little stronger to become a more well-rounded pass rusher and improve his run defense, but Ojulari has the frame, traits, and bloodline that projects to be a productive pass rusher in the league for years to come, teaming up with Watt, Highsmith, and Cam Heyward to make Pittsburgh a vaunted pass rush defense.

The subtleties of rushing the passer from BJ Ojulari are truly something. Starts off by acting like he is going to attack the outside shoulder of the guard. Crosses face with a violent swim move and gets home for the sack. pic.twitter.com/P88qcAHpMx

Analysis: The Steelers tried to go the cheap route and invest two-year deals with an average yearly value of $4 million into CBs Ahkello Witherspoon and Levi Wallace this offseason. While Wallace has played well at times, neither cover man should be considered a #1 CB.

Enter Emmanuel Forbes who has been one of the most productive players in college football since stepping on campus. Forbes picked off five passes as a freshman and has six so far in 2022. With 14 career INTs and 20 PBUs in three seasons, Forbes is as good as a ball hawk as you are going to get, having the length and instincts to cover the opposition’s best receiver with a knack of producing turnovers, having six pick sixes to his name in three seasons. Throw in the fact that he is a willing and aggressive tackle with good height and length, he could be exactly what Pittsburgh is looking for to add to their secondary.

Analysis: The Steelers improved the defensive line from last season, but with the status of Tyson Alualu, Larry Ogunjobi, and Chris Wormley all up in the air after this season as free agents, Pittsburgh should continue to inject youth and talent into the trenches.

Enter Michigan DL Mike Morris who fits exactly what Pittsburgh looks for in their base DEs. Morris has a great frame, standing 6’6, 292lb with the strength to hold his own at the point of attack as well as the movement skills at his size to rush the passer. He has played out on the edge as well as inside for the Wolverines, making him a movable chess up-and-down the LOS. Morris posted 7.5 sacks, 11 TFLs, and three PBUs as a senior this season, and figures to be a suitable replacement for Chris Wormley this offseason as another Michigan Man comes into the fold to play alongside Cam Heyward.

The Michigan D has allowed an FBS low 11.2 PPG, and EDGE Mike Morris has dominated in replacement of Hutchinson & Ojabo 💪

This season as the main pass rusher is doing wonders for his draft stock 🔥 pic.twitter.com/Qu15OkeL2K

Analysis: The Pittsburgh Steelers invested a Day Three selection in LB Mark Robinson last season, and given the status of upcoming FA Devin Bush and the uninspiring play of Robert Spillane, the team could use a difference maker. Enter LB Ivan Pace Jr. who should be drafted far higher that this selection based on his play and production this season, but his last of ideal size and overall athleticism likely will cause him to fall down draft boards like plenty of other undersized off-ball LBs.

However, Pace is one of the most disruptive players in college football, having recorded 136 total tackles, 20.5 TFLs, nine sacks, and four PBUs in 2022. Pace was the MAC Defensive Player of the Year last season before transferring from Miami of Ohio to play with his brother in Cincinnati. The lack of size will deter some from selecting Pace, but his tenacity and relentless pursuit of the ball as a defender should make him a special teams’ ace at worst with the chance to earn first-team reps.

Analysis: Plenty of yinz aren’t going to like this, but there is a good chance that the Steelers target a backup QB of the future in the 2023 NFL Draft. With Mason Rudolph scheduled to become a free agent and Mitch Trubisky likely to be released to save cap space and to give him a chance to start elsewhere, the Steelers will need to add QBs to the room. While they will likely go out and land another veteran, what will likely happen is sign a low-cost backup option to mentor Pickett as the team’s QB1 next season and use a Day Three pick to groom their future backup QB.

Georgia QB Stetson Bennett would be the perfect backup to Pickett. Bennett is an older prospect but has ample experience playing at the highest level of college football, thus is more ready to step in should Pickett go down than other Day Three signal callers. He is extremely poised in the pocket and is accurate with the football, leading the Bulldogs to two-straight national Championships. While his lack of size and arm talent may not wow you, he is a cerebral player that has displayed great leadership time-and-again and would be a great add to the locker room and a resource for Pickett as a glorified second QB coach in the room.

STETSON BENNETT!!!! WHAT A THROW!!! pic.twitter.com/r2dQAZtCKg

Analysis:  With so much uncertainty with Pittsburgh upfront along the defensive line this offseason, using two draft picks with one at DE and the other at DT could be in the cards for a team that needs to add more depth before 2023. That DT selection is Alabama’s D.J. Dale in this scenario as the 6’3, 307lb interior defender has gotten an extensive amount of experience playing in the trenches in the SEC.

Dale should be seen as more of a rotational defender that can play in the A gap or over the center while playing some at 3-tech as well. He is a dense defender that plays solid run defense while offering a little bit as a pass rusher too. Pittsburgh would have to look to add a starting NT in free agency, but Dale could come in to compete with Montravius Adams for reps as a rookie.