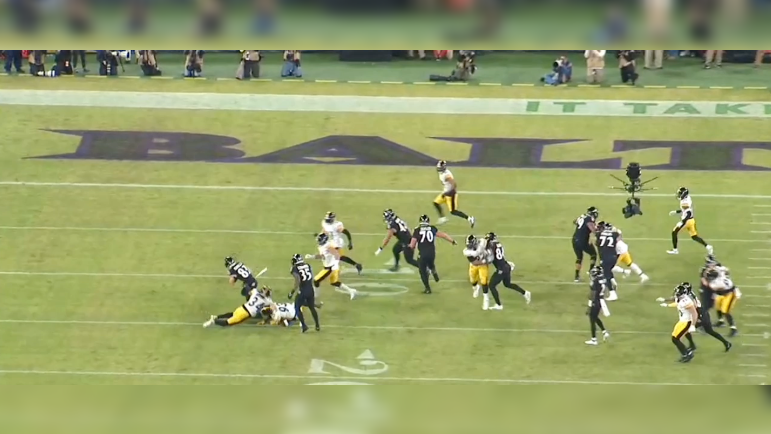 Another week, another rather solid performance overall from the Pittsburgh Steelers in the tackling department defensively.

One week after recording eight misses against the Las Vegas Raiders in frigid conditions on Christmas Eve, the Steelers put together another strong showing on Sunday Night Football in Week 17 against the AFC North rival Baltimore Ravens, finishing with seven missed tackles in the 16-13 win, including just two in the second half overall.

As this team continues to make a serious push for the playoffs in the AFC, they are getting the job done at a high level late in the season in the most important, basic part of football: tackling.

On a night in which the Ravens ran the ball with some success, seven missed tackles can be a bit of an alarming number overall. That number was largely on par with the Steelers performances against run-heavy teams in the second half of the season, though.

Against Baltimore, Cameron Heyward missed his first tackle in 12 weeks, dating back to the Week 5 loss on the road to the Buffalo Bills. The work he’s done defensively this season in the trenches is rather remarkable, and he continues to be one of the most consistent tacklers on the Steelers, let alone in the NFL, year after year.

That said, against Baltimore on Sunday night, Heyward couldn’t get off a block in time in his gap, allowing Baltimore running back J.K. Dobbins to shake loose for a 15-yard gain on Baltimore’s first scoring drive of the game.

After lamenting the fact that he couldn’t stay in his gap and get off blocks in the first matchup against the Ravens a few weeks ago, Heyward had a slight lapse on the play as left tackle Ronnie Stanley was able to create some movement off the ball and get Heyward leaning just enough to his right to win the rep, allowing Dobbins to break through.

Though Heyward only gets a hand on Dobbins and is still engaged with Stanley at the time, it’s a play we’ve come to expect from Heyward in the hole. He didn’t make it and it went for 15 yards.

Later on in the same drive, safety Terrell Edmunds missed his lone tackle of the game, giving him nine on the season. Edmunds played rather well in the box overall against a physical Baltimore team, but in a matchup he should have won easily on the edge against slot receiver Andy Isabella on a jet sweep, Edmunds missed the stop at the line of scrimmage.

Again, that’s a play Edmunds is expected to make. A smaller receiver like Isabella should be no match for Edmunds in space. Instead, Edmunds goes low and falls to his knees, allowing Isabella to slide backside and step through the tackle attempt on the edge, picking up a few yards in the process after the miss. Fortunately, Robert Spillane and Alex Highsmith are there to clean up the miss for minimal damage.

Late in the first half, rookie linebacker Mark Robinson — making his first career start — recorded his first missed tackle of the season.

Robinson was very physical overall flying downhill and sifting through traffic to find the football against the Ravens. He missed Dobbins in the backfield though on one rep.

Outside linebacker T.J. Watt does a great job of slipping inside fullback Patrick Ricard to blow up this play, allowing Robinson time to work into the gap and get downhill. Robinson wrong shoulders Dobbins in the backfield though and doesn’t get his head across, allowing Dobbins to bounce off and get to the line of scrimmage and pick up 5 yards on the play before Spillane and rookie DeMarvin Leal get him to the ground.

Finally, in the third quarter, Alex Highsmith recorded his missed tackle, giving him eight on the season.

Highsmith did a fantastic job reading the play and getting a great jump at the snap to get into the backfield ahead of the pulling linemen to get a shot on Dobbins.

He doesn’t bring his feet or wrap up at the point of contact in the backfield though, guessing which way Dobbins would try to cut to avoid the tackle for loss. You can see how upset he is after the miss, as it should have gone for a tackle for loss. Instead, Dobbins turned it into a 2-yard gain.

Those types of plays have to be cleaned up moving forward from the third-year outside linebacker. He does everything very well right up until the point of contact against Dobbins. It’s a learning opportunity for Highsmith in a breakout season.

Second-year running back Najee Harris was an absolute force throughout the game against the Ravens. He ran hard consistently, causing the pile to fall forward time and time again. When he had the opportunity to, he dished out punishment and showed off great vision and elusiveness to cause defenders to miss.

In recent weeks we’re starting to see the Harris that was so prominent at Alabama time and time again. He’s such a smooth operator overall. He’s not going to rip off the explosive runs and hit the home run, but he will wear defenses down with his power and want-to to dish out punishment.

His vision has improved greatly in recent weeks too. Harris and the offensive line are in great sync overall.

For how much he is maligned within the fanbase and the media, one would think Johnson is one of the worst receivers in football and a complete waste of money. That isn’t the case.

Johnson remains electrifying after the catch and is a good leader for the offense overall.

In a critical situation Sunday night, Johnson came up large on third down.

His ability to create separation with ease is something to watch, and he’s still very good after the catch. Here, he does a great job turning this back inside, easily stepping out of the tackle attempt from Brandon Stephens, picking up 15 yards in the process to move the chains.