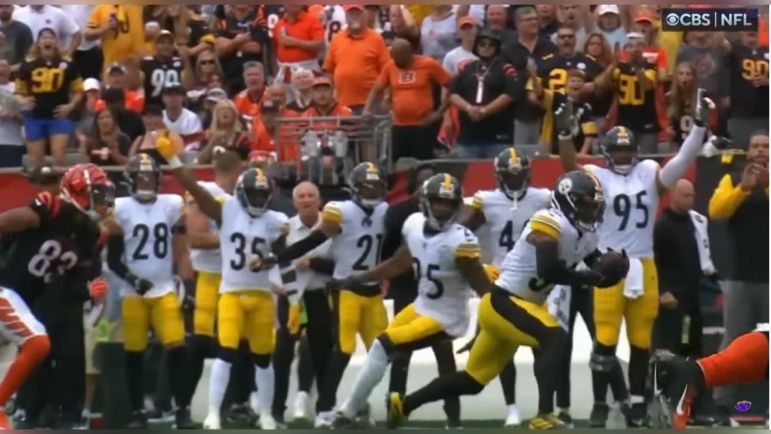 Two plays into the 2022 season, Pittsburgh Steelers star safety Minkah Fitzpatrick showed just what type of season it was going to be individually for the perennial All-Pro.

On the second play of the season in the Week 1 road matchup against the Cincinnati Bengals, Fitzpatrick jumped a route and picked off Bengals quarterback Joe Burrow, returning the interception 31 yards for the score, giving the Steelers a 7-0 lead less than a minute into the game.

Minkah Fitzpatrick picks off Joe Burrow and takes it back the other way for a Steelers touchdown. pic.twitter.com/x5K2zbO4GW

The interception was the first of six on the season for Fitzpatrick, setting a career high and helping him tie for the league lead in interceptions, doing something no Steelers defensive back had done since Mel Blount in the 1975 season.

In that Week 1 matchup against the Bengals, Fitzpatrick was really only getting started. That day, Fitzpatrick also blocked the potential game-winning extra point, sending the game to overtime, where the Steelers eventually won 23-20. Fitzpatrick added 14 tackles and a pass breakup in the win, earning the AFC’s Defensive Player of the Week honors.

That performance, though it came in the first week of the season, earned the Best Individual Performance of the Season award from ESPN’s Bill Barnwell Monday.

Minkah Fitzpatrick vs Bengals in Week 1 👏

“I have to go all the way back to the season opener for the single best game I saw from any player. Given what we know about the season that followed, Fitzpatrick deserves the credit for keeping Mike Tomlin’s streak of winning records alive for another season,” Barnwell writes regarding Fitzpatrick’s Week 1 showing. “Saddled by a Mitch Trubisky-led offense, Fitzpatrick helped produce points for the Steelers, as he took a Joe Burrow interception 31 yards to the house. The lead held up until Burrow found Ja’Marr Chase for what looked like the game-winning touchdown with four seconds to go, but Fitzpatrick saved the day by blocking the ensuing extra point, pushing the game to overtime in the process.

“The Steelers still had to fade a 29-yard miss by Evan McPherson, but a Chris Boswell field goal with five seconds left in overtime was enough to win the game. It would be unfair to say Fitzpatrick single-handedly won the game for his team, but it’s difficult for an individual defensive player to do more for his team than Fitzpatrick did in Week 1.”

It’s a bit surprising, honestly, that an individual performance in the first week of an 18-week season held up as the best individual performance of the year, but that speaks volumes to just how impactful the showing was from Fitzpatrick, who signed a market-setting extension in the summer leading into the 2022 season.

That performance against the Bengals erased any silly doubts that some may have had regarding Fitzpatrick being worth top dollar.

Of course, that performance was forgotten about a bit due to the injury T.J. Watt sustained late in that game, changing the trajectory of the Steelers’ season overall. That said, Fitzpatrick continued his dominant ways throughout the season, finishing with 96 tackles, six interceptions, 11 pass breakups and the one touchdown, earning a trip to the Pro Bowl.

Based on his overall numbers and consistency in 2022, Fitzpatrick was also named the Steelers’ Team MVP and should be a First-Team All-Pro safety once again.