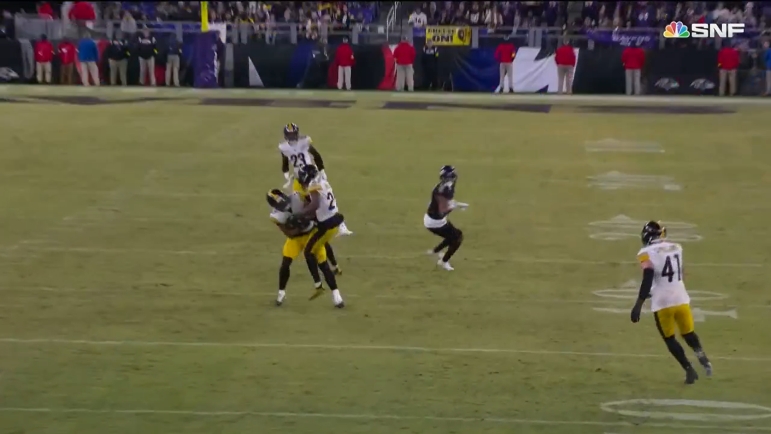 Now that the 2022 regular season is over, we can make it official. The Pittsburgh Steelers not only led the league as a team in interceptions but had the individual league leader in interceptions. Their two picks in the finale gave them 20 on the season, tying them with the San Francisco 49ers, who had three.

Pro Bowl safety Minkah Fitzpatrick entered the day with six interceptions on the year, a career-high and tied for the most in the NFL. That’s how he exited the day as well. It’s something no Steeler has done in quite a long time.

As I wrote last week, in fact, he is now officially the first Steeler to lead the league in interceptions since Hall of Fame cornerback Mel Blount intercepted 11 passes in 1975. He also becomes the seventh Steeler in NFL history to league the league overall.

Mike Wagner in 1973, Dean Derby in 1959, Jack Butler in 1957, “Bullet” Bill Dudley in 1946, and Art Jones in 1941 are the five prior instances of the Steelers having the league leader in interceptions on their roster for a season, though in almost every case, as with Fitzpatrick, it was as a share of the record.

In fact, Fitzpatrick was one of four players to intercept six passes this season, marking the first time since 2009 there was a four-way tie or more for the honor. He was joined by C.J. Gardner-Johnson, Justin Simmons, and Tariq Woolen. But it also must be said that nobody in NFL history has ever led the league in interceptions with fewer than six before. The leaders in the two previous years were in double digits.

As mentioned, the Steelers also finished the season with the most interceptions as a team in the NFL, picking off 20 for the season. In this case, we’re not talking ancient history. They most recently led the league as a team in interceptions just in 2020 when they had 18, finishing in a four-way tie. This year, they only share the distinction with San Francisco. But it’s only the second time they’ve led the league since the 1970s.

That they finished in the middle of the pack in total takeaways, however, speaks volumes. It means that they weren’t getting the breaks on fumbles. In fact, they had just three recovered fumbles, the fewest in all of the NFL, even though Alex Highsmith led the league with five forced fumbles.

The Steelers are going to need their defense to continue to be opportunistic as they move forward into their next chapter. This is a young offense that, yes, has potential, but is it going to be the Greatest Show on Grass? Not likely.