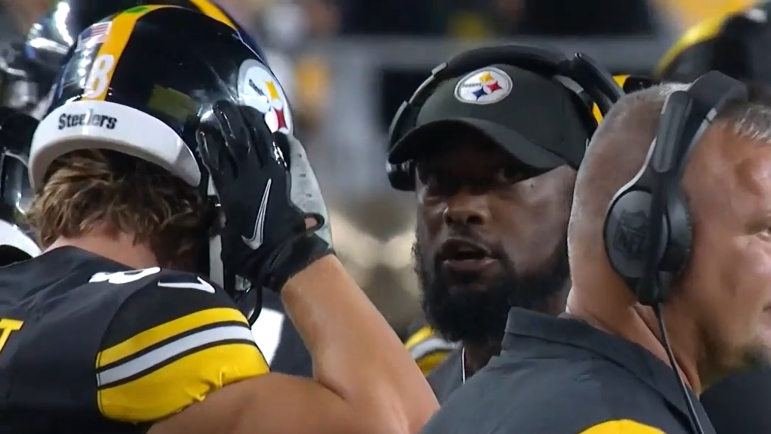 Everybody, it would seem, has their ‘Mike Tomlin story’, their recollection of their first experiences playing under him as head coach of the Pittsburgh Steelers. Whether it’s from veteran free agency coming in or rookies, we often hear many of the same stories.

They’re frequently about his personality, relatability, and leadership, but there are also the stories about Tomlin as the football guy. That’s a pretty key part of his identity that often gets overlooked, even though we often hear about it. Steelers quarterback Kenny Pickett was particularly impressed with how dialed-in Tomlin can be in understanding his opponents versus his own team.

“Coach Tomlin would lay out how we’re gonna win a game in that first team meeting”, he called when appearing on teammate Cameron Heyward’s Not Just Football podcast. “It’s kind of crazy; he would call out exactly how the game’s gonna go every single time. I would just take to heart exactly what he says, like, ‘Alright, this is how he sees it’, and I would try to execute to the best of my ability how he had it laid out”.

Of course, knowing how things will play out and having the ability to execute well enough to avoid the negative probabilities are two different matters. Tomlin might point out what they need to be able to do in order to win, but he surely also points out how the game would play out if they lose.

We saw games unfold in defeat this past season nearly as often as victory, as the Steelers finished the year with a 9-8 record. So clearly, he needs to do a better job of turning his football knowledge into on-field results, in whatever manner that takes, whether that’s personnel or coaching.

I do think that many tend to dismiss Tomlin as a student of the game, however, not just because of the Steelers’ recent results, but also because he doesn’t carry himself that way. He often deflects or dodges questions that push him into getting into the minutiae of this or that concept or particular opponents or trends, but those aren’t the stories that we hear from players and coaches.

Tomlin has never seemed to be concerned about whether or not he is perceived as a great football mind, in spite of the fact that that’s how he first earned his reputation. There’s a somewhat famous story of a first-year defensive backs coach going up to All-Pro safety John Lynch with a list of things he can do to improve his game, back when Tomlin was just getting started under Tony Dungy with the Tampa Bay Buccaneers.

But regardless of what he knows and when he knows it, he’s still staring at a six-year streak without a single playoff victory. Chuck Noll never had that. Bill Cowher never had that. Unless he can change that in the next year or two, now that he has his presumptive quarterback of the future, it’s going to get mighty uncomfortable in Pittsburgh.