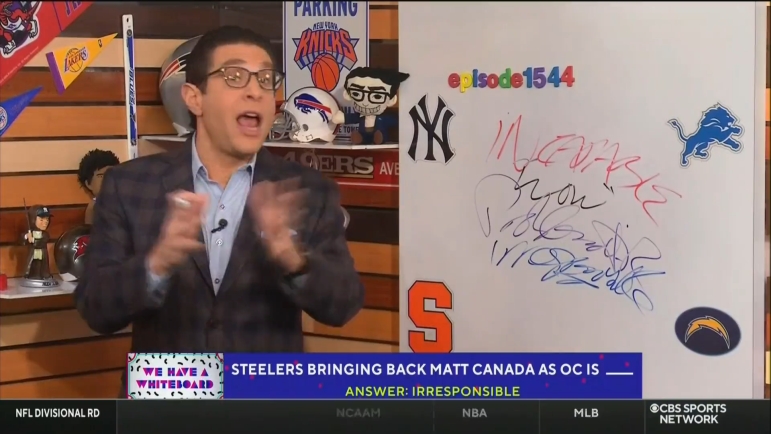 There seems to be a lot of discussion lately about Pittsburgh Steelers offensive coordinator Matt Canada and the fact that he isn’t former Pittsburgh Steelers offensive coordinator Matt Canada. The team confirmed through a spokesman yesterday that he would remain on the job in 2023 despite rampant speculation that he could be fired.

Very few people seem to be happy about it, or even not upset about it. CBS Sports’ Adam Schein certainly didn’t hold back his feelings when he went on the air to discuss the Steelers’ decision to keep a man whose offense barely averaged 18 points per game.

“Pittsburgh bringing back Canada is irresponsible. Absolutely irresponsible”, he said in his segment. “You have young Kenny Pickett. You have George Pickens. You have an offense that has a lot of young studs. Najee Harris, [Pat] Freiermuth, [Diontae] Johnson”.

“I mean, Matt Canada is incapable”, he went on. “What’s the definition of insanity? Same thing over and over again, expecting different results. Why if you’re Mike Tomlin would you ever keep the train on the track? It’s already off the tracks! You need a new conductor on offense!”.

I feel terrible for my guy @ThePoniExpress and the amazing Steelers fans. I’m stunned the great Mike Tomlin didn’t make a change. Pittsburgh deserved so much better. Kenny Pickett did, too. https://t.co/4FEzz8UpCE

Strong words, but ones that will find a wide audience. It’s hard to defend an offense that scored the 26th-fewest points in the league, after all, and that’s in a year in which two teams played one fewer game because it was canceled due to a medical emergency.

Many will view the decision by the Steelers to retain Canada as insanity. Especially their fans, who have watched his offense run for the past two years. Were there improvements in the second half of the year? Sure. Do they promise a much better season in 2023? Not really.

Much of the promise of a better season comes not from the man running the offense but the men executing it. that starts with quarterback Kenny Pickett, who is just coming out of his rookie season and still has a lot to learn.

Canada may be a former quarterbacks coach, but he’s not Pickett’s quarterbacks coach. That job falls to Mike Sullivan. Still, Pickett has spoken highly of Canada, whom he originally met while the latter was offensive coordinator at Pitt during the college recruitment process.

The Steelers know that the decision to retain Canada is not going to be met positively by the vast majority of people, but it won’t be the first time they’ve ever made an unpopular decision with the belief that it’s nevertheless the right decision.

One factor they may have considered is the available market for offensive coordinators. If they did not believe that there is a current candidate out there with whom they believe they can have a long-term partnership, they may have decided that it’s best to retain continuity for now rather than stunt Pickett’s growth by throwing him into a new offense that they don’t expect will be a lasting one.