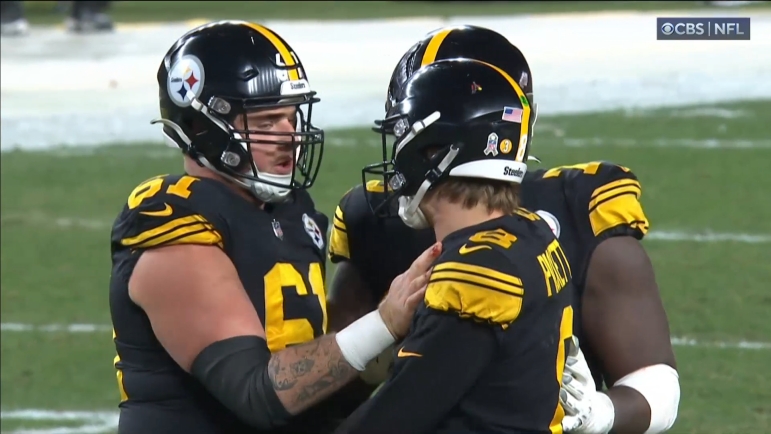 While the Pittsburgh Steelers generally have a young offense, the one place where they do have a decent amount of experience is up front along the offensive line. They have three fifth-year players in the mix, including their own 2018 third-round draft pick, right tackle Chukwuma Okorafor, along with 2022 free agent signings Mason Cole and James Daniels.

All of them have had experience playing with different quarterbacks with different approaches and different attitudes, often more veteran quarterbacks. Cole, for example, played with Kirk Cousins in Minnesota and Sam Bradford in Arizona. And he sees in Steelers rookie Kenny Pickett a quarterback perhaps beyond his years.

As you undoubtedly know, the Steelers have won their past two games via the game-winning drive, with Pickett throwing touchdowns to win the game with under a minute to play. He has four game-winning drives on the season now, but he’s done it in primetime two weeks in a row with 59 minutes gone.

Granted, Pittsburgh has scored a combined 29 points in the past two games, which is actually quite pitiful when viewed in a vacuum, but the reality is they won both of those games and the offense did what it needed to do when it was needed.

“We weren’t getting a lot of points, but when we needed it most, Kenny got it done”, Cole said, reflecting on the team’s past two games, which has them in the thick of the playoff hunt after starting 2-6. “It’s pretty cool to be around a special talent like that”.

We’ve heard a lot of comments over the past several months about special this or special that when it comes to Pickett. For the most part, those remarks have been reserved to descriptions of intangible qualities.

The truth is he doesn’t have a special arm or special athleticism. They’ve also largely been playing an inferior slate of competition over the back half of the season. The Steelers’ 6-2 record cannot be the start and finish of the evaluation of Pickett.

But we’re also dealing with a player’s rookie season, one for which he was not prepared by the team to be the day-one starter. His story is far from written. He’s shown a lot of encouraging signs, and they’ve been winning games, but we should get a much better idea of how special Pickett is next season.