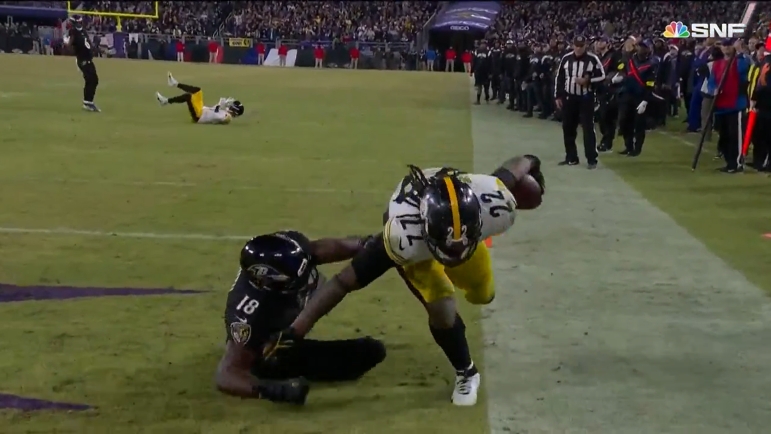 If the NFLPA can pretend to have its own All-Pro List, I think we can make up our own awards too, right? Well, we’re doing it anyway, for the second year in a row. Several of us will be submitting our own nominations for player awards in a number of different categories, and perhaps get into some spirited debate along the way. Here’s my ballot for the categories we’ve considered this year:

I think we have to give it to Najee Harris. We talk a lot about how much of a difference T.J. Watt’s presence made in the second half of the season, but what about the difference between an injured Najee Harris and a healthy one?

Now health wasn’t the only factor in his improved numbers—the growth of the offensive line was huge, too—but he was simply a different runner down the back stretch this year. Violent. Physical. Dynamic. Not breakaway, but he’ll give you some of the best 10-yard runs you’ll see. He allowed the Steelers to win the time aspect of games and stay ahead of the chains, a crucial factor in their leading the league in third-down conversion rate after the bye.

Again, we talk about Watt here, but if it weren’t for Alex Highsmith, the Steelers wouldn’t even have had much of a defense while Watt was sidelined. And when Watt returned, when he didn’t have to play across from Malik Reed, he took his game to another level.

I really think Highsmith should have been in the Pro Bowl this year outright, and that’s not just a commentary on his sack numbers, which are notable. He is and has been a complete player, and the Steelers should reward that with an extension this offseason.

I’m going with the obvious here, but if you draft a quarterback and he shows signs of being your franchise guy, it’s kind of hard to steer clear of that. I don’t know if Kenny Pickett is going to be ‘the guy’, but I don’t know that he’s not, either, and for a guy who started most of the season, you can’t ask for much more than that at the end of his rookie year.

Obviously, the two areas where we want to see growth is in hitting on the explosive plays and finishing more drives in the red zone. He has to work on staying in the pocket more and some other things, but these are all workable. He won some games for us this year over the past couple of months. He wasn’t just along for the ride.

You’ve got to love underdog stories. Yes, there are a lot of undrafted free agent running backs out there, but how many come into their rookie season and show off as complete a skill set as Jaylen Warren did for the Steelers this year?

Let’s just put it this way. He became their third-down back even though they already had Najee Harris, who did that very well as a rookie and is also a complete back. He runs like a bowling ball. He is the one of the two who had the explosive runs. And my god does he just love football and take nothing for granted. There’s a reason he’s already a lot of people’s favorite Steeler.

I’ve got to go in this direction, for multiple reasons. Not only was the Tyson Alualu of 2020 sorely missed, but it’s also just really disappointing to see his career presumably end this way. After missing most of last season due to a broken ankle, he just could not play at the same level coming back this year. He lost his anchor and was finding his way to the ground. He got demoted. He deserved a better ending to his career for as good as he was at what they asked him to do.

Am I going to get crucified for this? Probably. But man, considering some of the opinions out there about who Diontae Johnson is as a player, it sure seems like the obvious answer about who is the most underrated on the team, because he’s a lot better than many seem to think or be willing to believe in spite of his frustrating flaws.

When it comes to the 2022 season, you have to look beyond the numbers, because they’re not going to tell you everything you should know. And I don’t have the space or patience to do it here. All I’m going to say is that if Kenny Pickett is the quarterback the Steelers think he is, Johnson is going to have a great year in 2023. Book it, and then call me out a year from now if I’m wrong (or pretend I never said it if I’m right).

This is a play that I think will enter Steelers lore, although it might have had more staying power if the Steelers made it into the postseason. First of all, it was a great play. Although Pickett flushed out of the pocket before he needed to, he made a beautiful anticipation throw with touch and Harris showed his soft hands to finish the play. Against the Ravens. To keep the postseason hopes alive. It was special. I know because I actually stood up and said ‘holy shit’. I usually sit here quietly taking screenshots and writing during games.

After some years of sub-par performance and coaching, the group appears to be headed in the right direction at long last, and it was a process of people buying in, old and new. The rebuild of the group is still underway, but perhaps Meyer will be the guy who sticks and oversees it into the next era of great line play.

The fourth-round rookie who never played. The Steelers are going to need wide receiver help and Austin could be a big part of that. Will he be their starting slot receiver in between Johnson and George Pickens? He’s still got everything to prove (he was injured before even playing in the preseason), but how can he not be the guy you most want to watch?

I kind of wish it was Myles Jack or Larry Ogunjobi, but I think you have to give it to James Daniels. He came in and gave the Steelers what they paid for. I think he’s going to be a long-term success story here, considering he’s still just 25. He’s only going to get better.

Speaking strictly of who could have changed the Steelers’ outcome in 2022, I think you have to give it to the old man. Would the Steelers have made it to the postseason with Roethlisberger back this year? Assuming his body still held up, I think you have to say absolutely yes. He was the difference the year before in all the close games they lost in 2022. And the pass protection this year was a lot better. We definitely would have seen a lot more than 12 touchdown passes all year, and fewer signs of obvious frustration from the wide receivers.