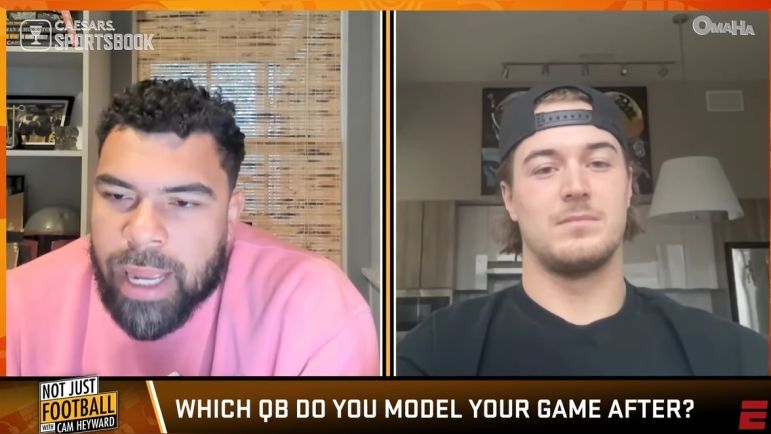 80% of what a quarterback does is foundation. It’s from within the pocket, inside structure, exactly how the play is designed. The very basics of quarterback play anyone who plays the position, superstar to career backup, must master.

But the other 20%? That’s where the magic happens.

That’s what separates Patrick Mahomes and Josh Allen from the rest. The work outside of structure, when the play breaks down, when the pressure is on, when a quarterback is forced to move. That’s next-level.

He’s got the foundation down. Mostly, anyway. Nothing’s perfect but his progress is clear, a far better passer the second half of the year than the first half. Now, he wants to play like the best. Speaking to Cam Heyward during the latest Not Just Football podcast (that was very much about football today), Pickett spoke about where he wants to grow for next year.

“I love watching Josh Allen and Patrick Mahomes and their off-platform stuff. How they extend plays. Something that I think I improved on in the back half of the season. Something that I can continue to improve on. Just using my athleticism, extending and getting guys open down field.”

For Mahomes and Allen, those two make ridiculous off-platform plays on a weekly basis. Heck, it usually happens once per drive. Mahomes with his incredible arm angles, backyard football style of pushing, flipping, lofting, floating, soft-balling the football to his target, whatever is needed to complete the pass. Allen has rare size and athleticism, throwing defenders off, hurdling players, as if Earl Campbell had a rocket arm. They are the exceptions, not the rule, but it’s an area every top quarterback has to be proficient at.

As Pickett said, he got better towards the end of the year at improvising and keeping his eyes downfield, like his game-winning touchdown to Najee Harris in the closing seconds. He scrambled left, kept eyes on his target, and delivered a strike to Harris for the score.

That’s just one example of several he had down the stretch. Early in the year, Pickett would look to run the moment he began to scramble, an instinct most athletic quarterbacks like him possess. But after the bye, Pickett became more comfortable running to throw, not scramble and take off, and the offense was better for it.

While Pickett is disappointed to be watching the playoffs from home, he told Heyward he’ll use the time to watch the AFC’s top quarterbacks, including Allen and Mahomes, to learn from them and apply it to his game.

“You watch how those guys can pretty much make throws from any platform either going right or left. I think that’s kind of a really impressive part of their game that I like…I’ll sit here and watch all the playoff games and see what I can learn from.”

It’s one of several areas Pickett will look to grow upon in the offseason. We plan on doing a deep dive into his rookie campaign and identifying other key aspects of his game that can get better. Improving in the red zone also figures to be high on the list. But that’s an area where scrambling can be effective. Without vertical space to attack, being able to move the defense horizontally helps create spacing and windows and allows some of the top quarterbacks in football to hit open receivers.

Check out the full interview with Pickett by clicking below.