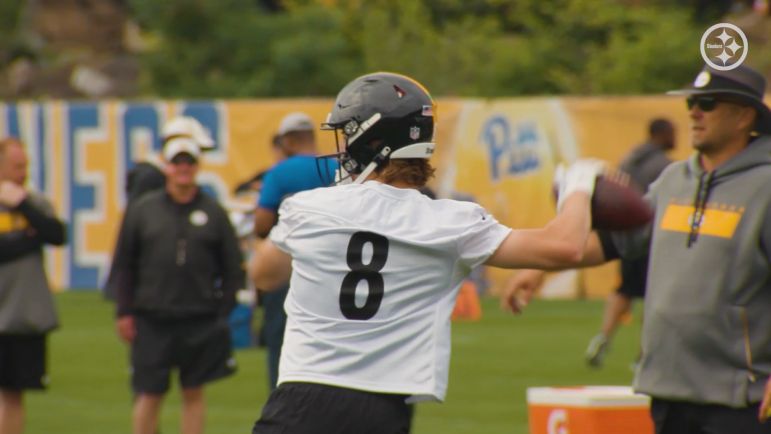 Kordell Stewart knows a thing or two — or four — about dealing with offensive coordinator changes while the starting quarterback of the Pittsburgh Steelers.

Stewart, at one point in his career, saw four different offensive coordinators in six years, which created a lot of headaches and stunted the growth of not only the Steelers offense at times, but his own growth at quarterback overall.

So, seeing the decision by the Pittsburgh Steelers under head coach Mike Tomlin to retain second-year offensive coordinator Matt Canada for a third season in 2023 had Stewart rather happy with the move overall.

Appearing on 93.7 The Fan’s PM Show with co-hosts Andrew Fillipponi and Chris Mueller, Stewart stated that the best thing for the Steelers with quarterback Kenny Pickett and Canada is to let the offense be and let it grow.

“Leave it be; give it a chance,” Stewart stated to Fillipponi and Mueller, according to audio via 93.7 The Fan. “Let’s see what happens. …The adjustments being made allowed them to be in position from 2-6 to 9-8 to get a chance to get into the playoffs. …I’d say you give Coach Canada an opportunity to take another run at this thing, let that young quarterback in Kenny Pickett to say the same plays again, same formation, same players, same motion, same feeling of…being in the same situation.

“Let it be. Considering what I had to experience, six years and four coordinators – not including the ’95 and ’96 seasons…you think about it: five, six coordinators in an eight-year span, so we’re talking about here? Getting rid of Canada? For what? So we can really see him [Pickett] struggle? Because I’m going to tell you, it’s not going to be easy getting a new guy coming in.”

That argument of continuity and familiarity with Canada and Pickett has largely been the argument for keeping the much-maligned offensive coordinator. Turns out, seems like that was a big piece of the decision for the Steelers and Tomlin, who want that stability and like the growth the offense showed in the second half.

Entering the offseason, not changing that voice or the playbook on Pickett might be the right call. He’s gone through nearly a full season as the starting quarterback in Pittsburgh, is familiar with the players, the playbook and the way the Steelers want to play, so changing all of that entering his first offseason as the true guy in Pittsburgh doesn’t seem like it makes much sense.

Hearing that perspective from Stewart is rather enlightening, too. Of course, Stewart had to go through the likes of Ron Erhardt in 1995, Chan Gailey in 1996 and 97, Ray Sherman in 1998, Kevin Gilbride in 1999 and 2000, and Mike Mularkey in 2001 before his time with the Steelers ultimately came to an end.

With 44 days until Steelers regular season football begins, here's the 44 yard TD pass from Kordell Stewart (@KSlash10) to Courtney Hawkins (@CoachHawk_5) against the Chiefs in 1997 on MNF. #Steelers #HereWeGo pic.twitter.com/wXdpojCuV8

Maybe having that stability is extremely important to a young quarterback early in his career as he tries to figure out the NFL landscape from not only an in-game perspective, but from a day-to-day operation as well. The Steelers did Stewart no favors from an OC perspective outside of Gailey, which happened to be his best years before Mularkey resurrected him in 2001.

Hopefully they don’t do the same with Pickett moving forward. The decision to retain Canada seems like the right one — for now — based on the stability and development side of things.