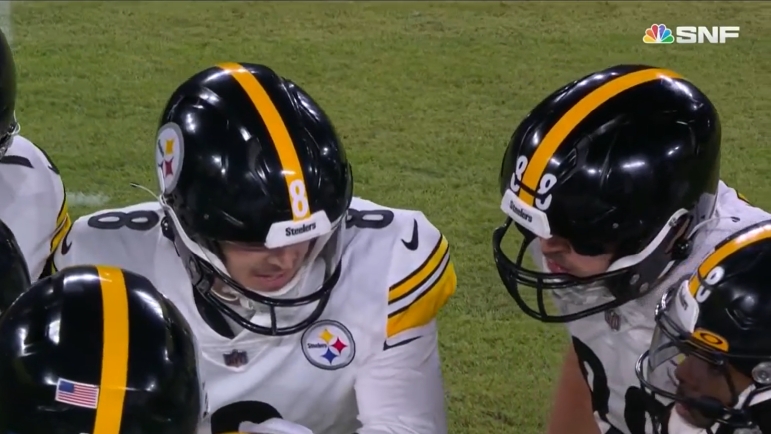 In his first two seasons in the NFL, Pittsburgh Steelers tight end Pat Freiermuth has experienced both ends of the spectrum when it comes to quarterback play, going from playing with a future Hall of Famer in Ben Roethlisberger in his rookie season, to working with rookie quarterback Kenny Pickett in his second season.

At this point, he’s seen it all and knows what a high level of play both pre- and post-snap looks like.

If the 2022 season was any indication of what’s ahead for the Steelers with Pickett under center, the future is rather bright. Freiermuth, who became just the second tight end in NFL history with 60+ catches in his first two seasons, joining the Philadelphia Eagles’ Keith Jackson, is a believer in what’s ahead with Pickett, too, telling Steelers.com’s Dale Lolley that Pickett is a “hell of a quarterback” and that this offseason is a big one in the development of the young offense overall.

Things might not have gotten off to the best start for the rookie quarterback in a young offense, with eight interceptions in just 4.5 games. But, following the Week 9 bye, Pickett was good overall, playing some of his best ball down the stretch while also leading four game-winning/comeback drives in the fourth quarter after the bye in wins over the New Orleans Saints, Indianapolis Colts, Las Vegas Raiders and Baltimore Ravens, showing just what he can do as he continues to develop.

For Freiermuth, once Pickett begins to find his own little nuances in the offense under offensive coordinator Matt Canada, much like Roethlisberger had throughout his career when it came to comfort and the ability to make checks at the line, the future is going to be a fun one in the Steel City.

“I think me and Kenny had a great relationship in our beginning stages of our careers here, and obviously there’s room for improvement. This offseason’s gonna be big for Kenny and the whole offense and skill position group,” Freiermuth stated to Lolley, according to video via Steelers.com. “So we’ll be getting together, and Kenny has to continue to find his little nuances in the offense, too. Different signals and all that kind of stuff like Ben [Roethlisberger] had, I think that was the difference. The biggest difference was Ben’s been around for 18 years, so he’s seen everything. So, he could check a play at the line and go from there.

“And obviously Kenny’s a little hesitant to do that now, but, you know, Kenny’s a hell of a quarterback and he’s the future of this organization and I’m excited for him to be my quarterback and be our leader.”

Those checks at the line and the ability to get into different plays quickly and go from there for Roethlisberger certainly didn’t come until a few years into his career. Early on, it was about staying within the structure of the offense and making plays after the snap with his legs, buying time and taking shots downfield.

Pickett certainly has the ability to do that, though he needs to get better at pushing the football down the field moving forward. Based on what he showed as a rookie down the stretch though, once he’s fully immersed in the offense under Canada and has a full offseason to prepare as the starting quarterback, things could really take off for the former Pitt star.

He’s got a ton of weapons around him and is working behind an offensive line that greatly improved in 2022. There’s a great deal of belief in him from not only those on the coaching staff and in the front office, but from teammates as well. He’s the guy moving forward. Now it’s about making that Year 2 leap.

For a guy like Freiermuth that has experience with the old, savvy vet and now the hot-shot rookie, the future is exciting — and bright.