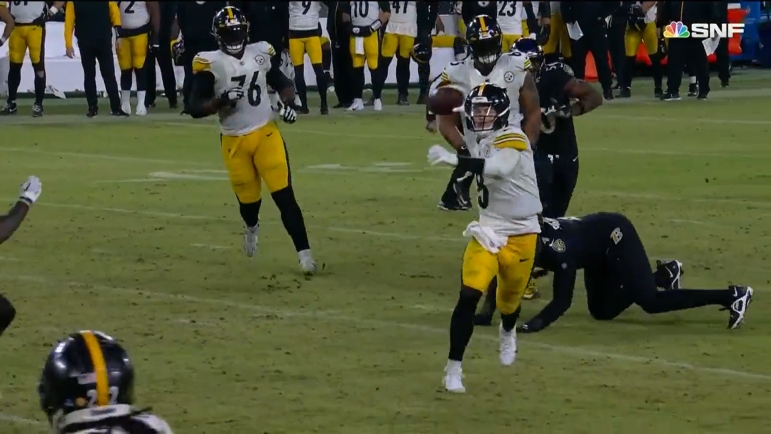 Blocking for a quarterback that likes to hold onto the football and extend plays with his legs, looking to make plays down the field out of structure can often be rather difficult for offensive linemen overall. Typically, a lineman needs to block for roughly 2-4 seconds — on average — from snap to throw for a quarterback in the passing game.

With a mobile quarterback that looks to extend and get out of the pocket, that can go all out the window, and can often make the offensive line’s pass protection numbers look worse than they really are.

For Pittsburgh Steelers center Mason Cole, the 2022 recipient of the franchise’s ‘The Chief’ award, which was established in honor of Steelers’ founder, Arthur J. Rooney, Sr., and is presented annually by the Pittsburgh Chapter of Pro Football Writers of America to a member of the Steelers’ organization that best exemplifies the spirit of cooperation with the media that he embodied, having mobility at quarterback — much like Steelers rookie Kenny Pickett does in abundance — can also be a huge asset for an offensive line and an offense in general.

Speaking with Steelers.com’s Dale Lolley Friday in a one-on-one interview for the team’s website, Cole — who has plenty of experience blocking for mobile, dynamic quarterbacks in his career, including Kyler Murray in Arizona — stated that Pickett’s ability to extend plays can get the offensive line out of trouble at times and adds another dynamic aspect to the offense overall.

“I think the big thing for us is a mobile quarterback can get us out of a lot of trouble. We’re not always perfect up there,” Cole stated to Lolley, according to video via Steelers.com. “Kenny’s done a really good job using his feet and making plays when protection breaks down, or things don’t go down, or things don’t go our way. It’s just part of the game.

Following the retirement of Ben Roethlisberger after 18 seasons at the helm of the Steelers under center, the black and gold made it a point of emphasis to add the element of quarterback mobility to the position in their foray into the future at the position.

Head coach Mike Tomlin consistently made it a point of emphasis when talking about the position late in the 2022 season and throughout the offseason, leading to the Steelers signing veteran Mitch Trubisky in free agency and adding Pickett in the first round of the 2022 NFL Draft at No. 20 overall.

Both were much better fits schematically in offensive coordinator Matt Canada’s offense and have helped bail out a rebuilt Steelers’ offensive line at times this season, being able to avoid pass rushers in the pocket and scramble to pick up yardage that is there. That didn’t happen much — if at all — in the 2021 season with an aging Roethlisberger.

With Pickett taking over in Week 4 at halftime against the New York Jets, that mobility became a prominent part of his game. He’s confident in using his legs to extend plays and scramble for free yardage and has added an element to the Steelers’ offense in the second half as Pittsburgh has gone on a 6-2 run since the Week 9 bye week to reach 8-8 with a shot to reach the AFC playoffs entering Week 18 against the Cleveland Browns.

It adds an element to the offense that has been missing and makes the Steelers all the more difficult to defend when firing on all cylinders.