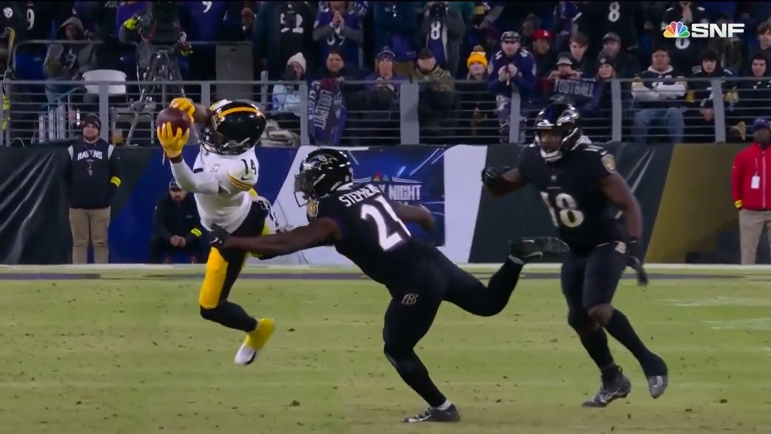 Pittsburgh Steelers QB Kenny Pickett jumped up the Pat McAfee Show Thursday afternoon to talk about the 2022 season, his relationship with OC Matt Canada, and his upcoming plans for the offseason.

McAfee asked Pickett about his relationship with fellow rookie WR George Pickens and how his trust in the first year wideout out of the University of Georgia evolved over the course of the 2022 season in contested catch situations.

“It’s all trust and what you show in practice,” Pickett said to McAfee. “I’m a huge practice guy and giving guys so many opportunities. If George didn’t make a play on a 50/50 ball, it was almost like a surprise to me in a game because that’s how consistent he makes those plays. I think we’re just going to grow in that area and I kind of understand where he likes the ball in certain situations.”

Watching Pickens play at the University of Georgia prior to the Steelers selecting him in the second-round in the 2022 NFL Draft, you could see the contested catch ability on full display, skying above SEC defensive backs on a regular basis to make impressive jump ball catches in coverage. Transitioning from college to the NFL, we saw Pickens pick up right when we left off, making impressive catches against the Steelers in training camp.

Pickett was right to be surprised if Pickens didn’t catch a 50/50 ball as he converted 19-of-28 contested catch attempts (67.9%) on the season. In fact, among wide receivers with a sample size greater than 70+ targets this year, George Pickens finished first in contested catch percentage in the regular season. This is a sign of hopefully good things to become between Pickett and Pickens as the two look to take a step forward together in Year 2 as they try to bring more splash to the Steelers’ passing game in 2023.