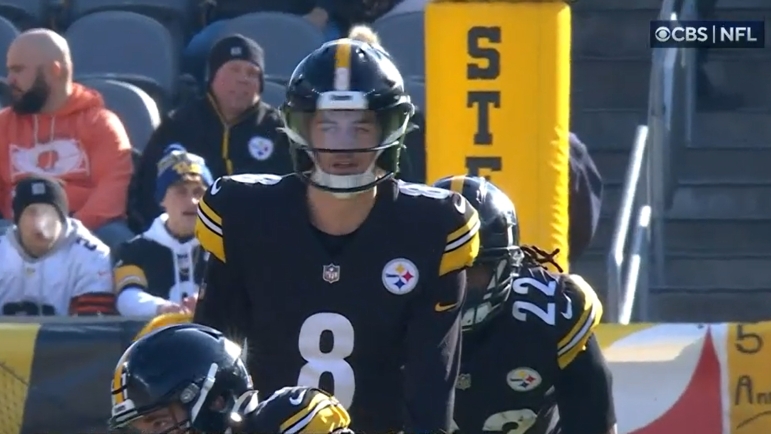 Now that we’re removed from the regular season and have time to reflect, it’s as clear now as it was in April that the quarterback class in the 2022 NFL Draft was rather poor overall, aside from one or two guys currently.

Of course, Kenny Pickett was the first quarterback selected in the first round — and the only QB taken before the third round — by the Pittsburgh Steelers at No. 20 overall. Pickett came on strong and showed serious flashes of being a potential franchise QB moving forward thanks to his overall confidence, moxie, and general leadership, helping guide the Steelers to a 7-2 record in the second half of the season.

.@Steelers @kennypickett10 for the 2nd week in a row ; takes his team down the field for the game winning TD! One brilliant throw after another. Steelers found GOLD in their back yard! #BaldysBreakdowns pic.twitter.com/O8mC9EGEXh

With Pickett the only real headliner from the quarterback class in the 2022 NFL Draft, one would think that the rookie quarterback, who threw for 2,404 yards, seven touchdowns and nine interceptions and added 237 rushing yards and three touchdowns would be on the NFL All-Rookie team from Pro Football Focus, right?

Despite being the highest-graded rookie quarterback in the league from PFF throughout the 2022 season, as well as one of the highest-graded quarterbacks on a consistent basis in the second half, Pickett did not make PFF’s All-Rookie Team, instead losing out to San Francisco’s Brock Purdy, who was the final pick of the 2022 NFL Draft and stepped into the starting role after Trey Lance and Jimmy Garappolo were lost to season-ending injuries, taking over for good in Week 12 against the Miami Dolphins.

On the year, Purdy threw for 1,374 yards, 13 touchdowns and four interception, earning the All-Rookie team nod over Pickett.

“Steelers QB Kenny Pickett had an encouraging rookie season, but what Purdy has achieved in such a limited time is extremely impressive,” PFF’s Michael Renner writes. “The 49ers have not lost any of the six games Purdy has played since Jimmy Garoppolo went down in Week 12 against the Miami Dolphins.

“The Iowa State product’s 76.6 overall grade led the rookie QB class, and his 107.3 passer rating led all quarterbacks with at least 150 dropbacks.”

Guess who is nowhere to be found in the top 15? Purdy.

In fact, Pickett comes in at No. 11 in McGuinness’ article with an overall grade of 75.5.

🎬Kenny Pickett with an impressive 3rd & 6 scramble left throw. He really throws this option route open. Love KP carving his angle downhill. Also, this is a bit of a unique way to get to an option route.#HereWeGo
📽️https://t.co/xQxZLvccnx pic.twitter.com/PxTLLLxJVa

Is Purdy the highest-graded rookie QB for PFF, or is it Pickett?

Technically, Renner is correct that Purdy had a 76.6 overall grade in 2022, but why was he not listed ahead of Pickett in McGuinness’ piece a day later? It’s all very confusing. That’s largely what PFF is today with its grading system though.

Back to the All-Rookie team, though. While Purdy has been quite the storyline, he stepped into a great situation overall under head coach Kyle Shanahan with the likes of wide receivers Deebo Samuel and Brandon Aiyuk, tight end George Kittle, running back Christian McCaffrey and one of the best offensive lines in football in front of him, led by future Hall of Famer Trent Williams.

He hasn’t really been asked to do too much, averaging just over 28 passing attempts per game to go along with an 8.1 yards per attempt average (average depth of target of 7.0 yards), while making just three big-time throws, per PFF charting. Compare that with Pickett and the numbers are pretty stark.

Pickett’s situation in Pittsburgh isn’t bad, but he doesn’t have the type of talent around him offensively and from a play-calling perspective that Purdy has. Pickett averaged 33 passing attempts per game for the Steelers, averaging 6.2 yards per attempt (average depth of target of 8.0 yards) and had 18 big-time throws on the year.

Purdy has been quite the find and looks like he’ll have a long career as a backup type under center, but it’s really hard to give him the nod over Pickett when you look at the raw numbers side by side.

In the end, the PFF All-Rookie team is meaningless, but it’s just another example of Pickett’s play being largely overlooked due to raw numbers that aren’t as flashy as others.