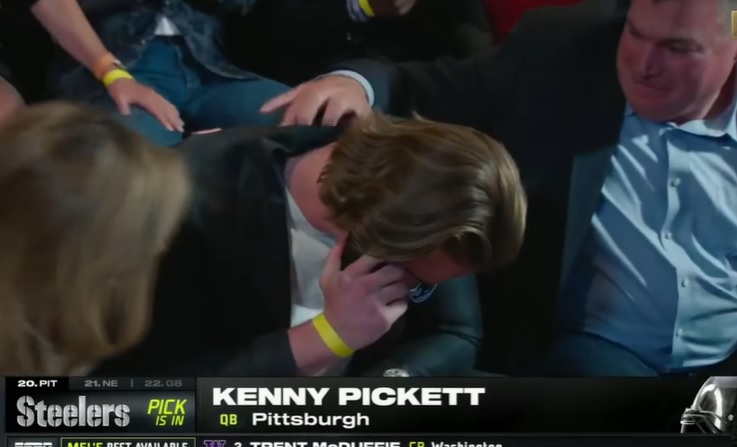 Even though the Pittsburgh Steelers’ first-round targets aren’t always oblique, at least after the fact, that doesn’t necessarily mean that they telegraph their intentions. In the case of quarterback Kenny Pickett, there really wasn’t much they needed to do in the pre-draft process. He’d been in the building already for half a decade, after all.

And so while he knew the Steelers could be a possible target, he continues to insist he didn’t know how draft night would go. And there was a point at which his household thought he was about to be a New Orleans Saint, who had the pick just ahead of Pittsburgh.

“I thought it was either gonna be the Saints or Pittsburgh. And if it wasn’t Pittsburgh, there was a lot of teams that said they were gonna trade back to get me, and there was a pretty long list of teams that told me that, ‘Listen, if you’re in that back half of one we’re gonna come get you’”, he said yesterday on Cameron Heyward’s Not Just Football podcast.

“After 20 it would’ve gotten pretty hectic, I think”, he said, if the Steelers were to have passed on him and the trade scenarios opened up. “But as I kept falling there, I think it was the Saints at 19 and my phone rang and everyone that was at my draft party thought it was the Saints”. And the Saints did like him.

He told the story about how his college coach, Pat Narduzzi, got a phone call from Steelers head coach Mike Tomlin just after the Saints’ pick was in. Tomlin told him, isn’t it cool that we got your guy? Little did he know who Pickett was speaking with at the same time.

“‘You’re one pick too late, man, the Saints are on the phone with him right now’”, Narduzzi told Tomlin, Pickett said. “And literally I was on the phone with [Steelers general manager] Omar [Khan]. It was so funny. ‘Duz thought I was out of here”.

Well, I don’t think Pickett is going anywhere anytime soon now. At least, that’s the plan. Pittsburgh has been home for the past half-decade, and now it might be home for the rest of his life. If he has anything like the career the Steelers have planned for him, I’m sure that will be the case.