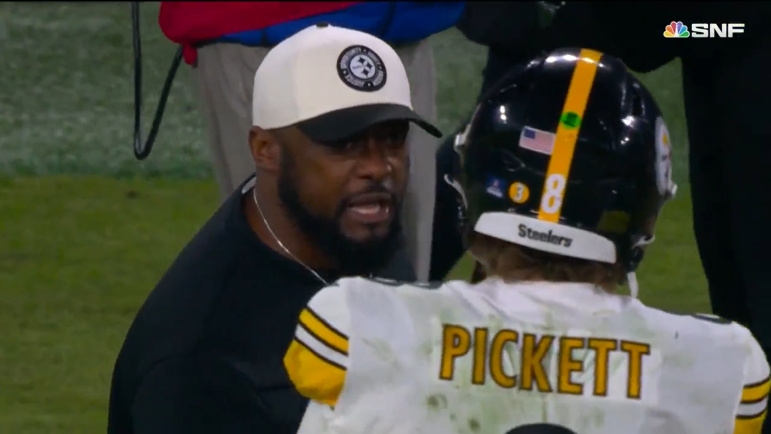 Whether the Pittsburgh Steelers’ first-round investment in quarterback Kenny Pickett was worthwhile will remain to be seen for a bit. However, his rookie season was promising, and saw him take big leaps as the year went on. In his final QB index, Marc Sessler of Around the NFL ranked Pickett at the 20th best quarterback in the NFL.

“Pickett poured it on over the final three weeks,” Sessler said. “Zapping the Raiders and Ravens with final-minute comeback marches that showed off a knack for rising to the moment. More than just late-game heroics, the rookie was PFF’s top-rated passer from Week 14 on.”

In a conference with no shortage of elite quarterbacks in the AFC, Pickett’s development is important. His initial struggles were all but unusual for a rookie quarterback, as many of the league’s greatest quarterbacks had similar initial bumps in the road.

In the team’s penultimate two games against the Las Vegas Raiders and Baltimore Ravens, Pickett became the first rookie quarterback to throw game-winning touchdowns on back-to-back games in league history. In doing so, he kept the once 2-6 Steelers in the playoff hunt until the season finale. Managing the pressure of a game-winning drive is not easy, especially as a rookie with the playoffs on the line. Pickett did so in one of the coldest games in Steelers’ history, and on the road against a tough Ravens’ defense.

As Sessler stated, Pickett was a top-ranked quarterback according to PFF in the last few weeks of the season. Not only that, but his 92.4 PFF grade against Baltimore was the best by a Steelers’ quarterback since Week 13 of 2015.

Kenny Pickett's 92.4 PFF grade vs the Ravens was the best in a single game by a Steelers QB since Week 13 of 2015 (Ben Roethlisberger, 93.4 vs the Colts) pic.twitter.com/hx6wLmWgIr

“Pittsburgh’s offense came and went,” Sessler continued. “But Pickett grew as a thrower on the move, used his legs to escape jams and developed a link with starry rookie wideout George Pickens. Pickett fits as a truly Steelers-esque answer under center who walks into next season as the unquestioned starter. Pittsburgh does REBUILDING YEARS differently than the rest.”

Pickett indeed grew as a passer on the run and scrambler, as he finished the year with 237 yards on the ground and had more than a few impressive throws outside the pocket. The Pickett-to-Pickens connection was indeed productive, ranking as one of the best in the league according to ESPN. The two will play out their rookie contracts together, and hopefully much longer after that.

Pickett finished 7-5 as a starter, and the Steelers finished 9-8 during a rebuilding year. The team found an identity, and Pickett was a big part of it. His development can be seen in Sessler’s rankings, as Pickett climbed up ten spots after he was ranked as the 30th quarterback in Week 8. While it is too early to tell whether he will be the franchise quarterback, there is no doubt that his rookie year was promising.