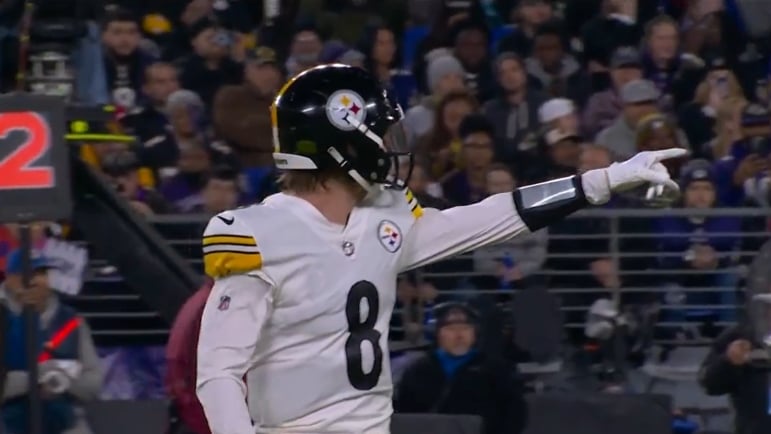 Pittsburgh Steelers rookie quarterback Kenny Pickett did not exactly look like ‘the franchise’ in the first half of the season. That shouldn’t be a great surprise. He was not being prepared to be the starter this offseason. And very few quarterbacks ever come out of the box ready to go.

He’s taken major steps forward over the course of the past couple of months, however, even if those means are not always so obvious on the stat sheet. He still only has four touchdown passes since the bye week, for example, in nearly 200 pass attempts.

He ranks dead last in the NFL in touchdown percentage among qualifying quarterbacks, and even his post-bye number would rank him there. But of course that’s only a part of the story, and he does have a touchdown pass in each of his past three full games. The headline is the improvement, which he sees in himself.

“I’m growing every week, that’s the positive”, he told reporters yesterday via the team’s website, while accepting the team’s rookie of the year award (the Joe Greene Great Performance award, given to the best rookie). “There’s things that I’m learning from and there’s things that are on tape now that I wasn’t doing it early in the season”.

Pickett was arguably more prepared than most college players, having attended college for five years and had the opportunity to play in the same stadium then as he plays in now. But there’s never any way to be fully prepared for the next level without going through it, and it takes time.

“I’m continuing to grow. It’s not going to happen overnight”, he said. “I like the way that I am trending. I like the way that I’m improving and seeing things on-field, taking what I’m seeing on tape and bringing it to the field and playing with a little bit more anticipation than I was earlier in the season. But I think it’s definitely a long journey”

He added that he thinks you’re always getting better for as long as you play. It reminds me of comments made by players like James Farrior, who even toward the end of his career acknowledged that there’s always something to learn.

“I’m going to continue to improve every week and just be the best player that I can be and try to get to that final result as fast as possible”, the rookie said. He is guaranteed one more game this season, but if the chips fall just right, they can still get into the postseason, and that in itself would be very valuable experience as well.

On the season, Pickett has completed 232 passes on 360 attempts for a 64.4 completion percentage. He’s thrown for 2209 yards with six touchdowns to nine interceptions, plus three rushing touchdowns in 11 starts out of 12 games played, with a 6-5 record.

And he’s got four game-winning drives and the complete confidence of his teammates. There’s no doubt he will be a captain next year. He obviously would be now if the team voted during the season.