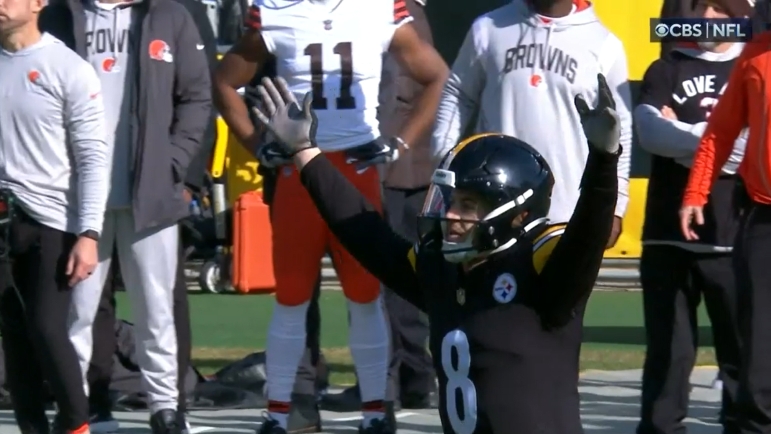 You tie your future to a quarterback when you draft him in the first round—or at least that’s almost always how it works out. The Pittsburgh Steelers certainly had every intention of doing that when they took Kenny Pickett in 2022.

The season that just came to a close didn’t really give them cause to question their plan. Certainly, there remains ample room for growth, but he displayed certain traits that you want to see out of the person destined to lead your team. His teammates see it in him as well, even if they insist on sharing the load.

“I think this could be Kenny Pickett’s team, but we’re not gonna put it all on his plate”, defensive tackle (and captain) Cameron Heyward said yesterday on the last episode of his podcast, Not Just Football. “It doesn’t have to be Kenny’s team. It can be the Steelers. It can be a defense that gets him the ball back and he thrives in those situations. We understand Kenny’s gonna continue to grow”.

He went on to discuss the fact that he believes the Steelers have Pickett in a good place with the weapons they have around him, from Diontae Johnson and George Pickens at wide receiver to Najee Harris at running back and Pat Freiermuth at tight end—even his little brother, ‘Meatball’ Connor Heyward.

The 20th-overall pick in the 2022 NFL Draft, Pickett started 12 of 13 games, going 7-5 officially as the starter of record, though he hardly played in one of the losses, including four game-winning drives. He went 245-of-389 passing for 2,404 yards with seven touchdown passes to nine interceptions, plus 237 rushing yards and three rushing touchdowns.

You have to dig deeper into the numbers and when they occurred, however, to track his progress. His first eight interceptions came in his first five games played before the bye week, by which point he only threw two touchdowns. He threw five touchdowns to just one interception after the bye.

That’s still not a lot of scoring—and often, the team really didn’t score that much. They were held to under 20 points in five consecutive games, only finally broken in the finale when they put up 28, their second-highest total of the year and the most in a win.

But it’s the actual game tape that tells you Pickett’s story, and we see a lot more from him than what the box scores and stat lines show. Things, perhaps, that only a couple have shown before in this franchise’s history.

“I think Kenny has that hunger to be the next great Steelers quarterback, and we’re gonna give him every opportunity to do that”, Heyward said. I don’t think there’s any question of that. At least they’re going to try to. As far as this offseason goes, that starts with figuring out what direction they want to take at offensive coordinator.