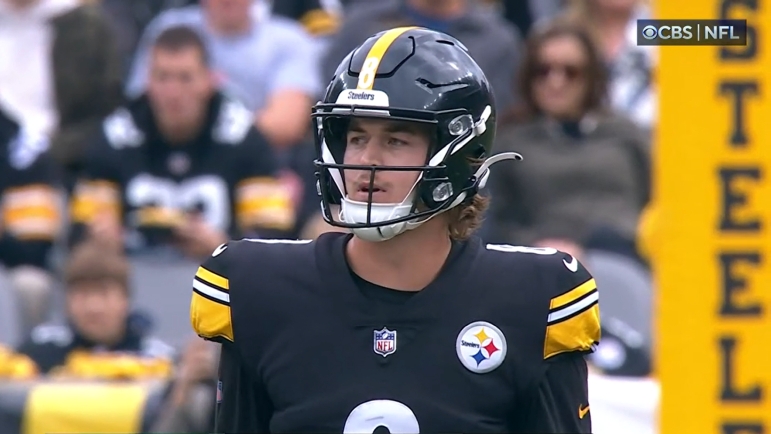 The Pittsburgh Steelers’ season completely changed at halftime of their Week Four game against the New York Jets. That is when rookie quarterback Kenny Pickett got the word that he would be taking over as starting quarterback.

Today, Pickett sat down with Dale Lolley in a video posted on Steelers.com and gave the world the story of how found out he would be taking his first career NFL snaps.

“I didn’t even bring my helmet in at halftime, so I obviously didn’t have any idea [I would be put in the game],” Pickett said. “I think Coach Canada said, ‘We may be going to you.’ I was like, ‘Okay.’ Then Coach T was like, ‘Yep, you’re up.’ So I was like, ‘Alright.’ I went out there early and just started warming up and we went from there.”

While it is not a crazy story with a huge build-up like it is a movie, it normally won’t be. But it did show the trust head coach Mike Tomlin and offensive coordinator Matt Canada had in Pickett to throw him into the fire mid-game against a very good defense.

Pickett’s first game wasn’t anything special, going 10/13 for 120 yards and three interceptions. Pickett ran for two touchdowns that game though as he provided an offensive spark for the team, something that wasn’t seen in the first three and a half games with Mitch Trubisky as the quarterback.

Despite losing the game 24-20, it is still arguably the most important game of the season as it was the start of the Kenny Pickett Era™. What made the moment even more awesome for Pickett is that he got to see NFL game action and score right before his grandfather passed away, which Pickett was thrilled to do.

“My first touchdown, my grandfather was able to see it before he passed the following week. So that was special. He always talked about being able to watch me in the NFL, so I was happy to get that.”

While the first appearance and a few games for Pickett weren’t all that great, they needed to happen for Pickett to grow. While some question the timing of Pickett’s introduction to the NFL, during a brutal stretch of games, maybe it was the right thing. It was clearly getting tense in the locker room with Trubisky and wide receiver Diontae Johnson getting in an argument at halftime.

Pickett’s NFL debut moment could have gone better, he could have led a win, and he could have even just started out of the gate. But it didn’t happen that way. It came at halftime of a game where tensions in the locker room were boiling and the offense couldn’t get going. Eventually, Pickett turned in a good rookie season, even though it was difficult at first. Next season should be even better for a quarterback who was certainly battle-tested this year.