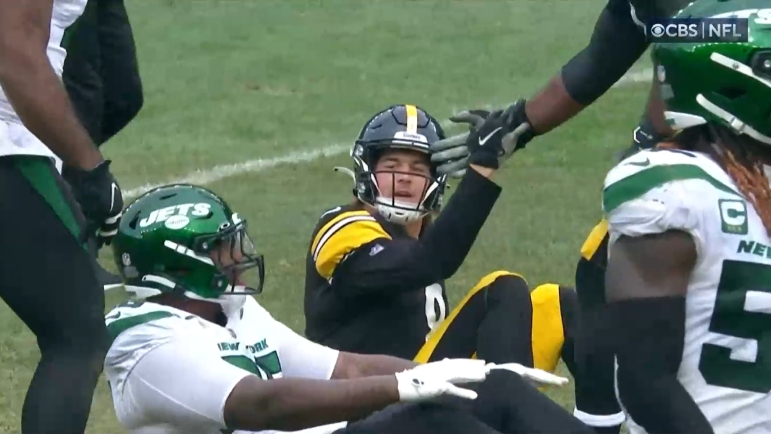 It didn’t take long for Kenny Pickett to have his “welcome to the NFL moment.” In his first game, Week 4 against the New York Jets, he took a hard shot from DT Quinnen Williams. Appearing on the latest episode of Cam Heyward’s Not Just Football podcast, Pickett said that was the play that told him – and made him literally feel – like he was playing against a different level of competition.

“That hit from the d-lineman against the Jets,” Pickett told Heyward. “We were going in, I threw a pass, and he caught me pretty good. Everyone was like, ‘oh, he got up laughing.’ I was pretty much laughing at how hard I got hit. In a sick way. Me and Quinnen were going back and forth all game.”

Here’s a look at the play. A sequence similar to what happened in the preseason against the Jacksonville Jaguars, Pickett rifled a throw down the middle to connect with TE Pat Freiermuth early in the fourth quarter. He paid the price, taking a hard shot from Williams, and you can see him laugh and talk to him as he got to his feet.

It was an early moment looking into Pickett’s mentality. Though he was laughing from the force of the hit, it shows the edge he plays with and how tough he is to rattle. Despite the ups and downs of his rookie season, of which there were many, Pickett proved to be a leader who didn’t wilt under pressure. If anything, he embraced those moments.

“That was probably it. That was a big dude who hit me. I got hit pretty hard on that one.”

Pickett would find the end zone the next play, his second quarterback sneak for a touchdown.

Unfortunately, the pain of the hit didn’t come with a win. The Steelers blew a two-score lead and lost to the Jets in what turned out to be a critical loss that defined their season, putting them in a 1-3 hole they nearly but couldn’t quite climb out of.

But Pickett’s season ended well and the Steelers won their last four games. Pickett enters next year as the team’s clear-cut #1 quarterback and should build on the success he had to close out the year. But he’ll remember his first big hit from Quinnen Williams. So will Steelers’ fans, who loved seeing Pickett’s reaction to the play.

Check out the full episode with Pickett below.