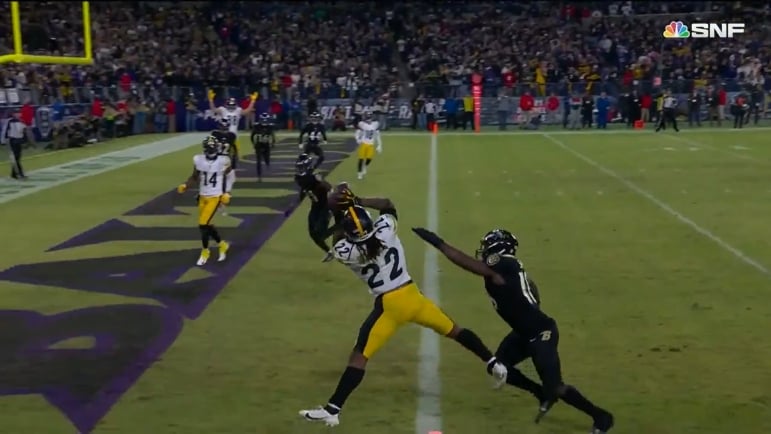 Sunday night, a star was born in Baltimore. Kenny Pickett played his best game of the season, leading another game-winning drive but this one in even more spectacular fashion to beat the rival Ravens in a must-win game for Pittsburgh.

Pickett capped things off with a game-winning scramble drill touchdown to Najee Harris along the left sideline, a perfectly placed pass and strong grab by Harris.

Speaking to reporters after the game, Pickett offered a brief overview of the play.

“Extend the play a little bit,” Pickett told reporters via the team’s YouTube channel. “Wanted to keep my eyes downfield.”

Down by four with 4:16 to go, Pickett moved the offense on an 11-play, 80-yard drive. He made several strikes downfield. One to Pat Freiermuth. One to Steven Sims. And the game-winner to Harris.

Here’s the final throw. Under pressure, Pickett rolled left, kept his eyes downfield, and put it on the money to Harris streaking down the left sideline.

Pickett confirmed the pass was intended for Harris and credited him for doing his job to find open grass.

“He did a great job of extending, getting past, slipping the linebacker. I just wanted to extend long enough where those guys could try and free themselves up a little.”

In his own postgame presser, Harris offered a similar evaluation of the play.

“It turned into scramble rules and I just scrambled like we practice…Kenny threw a good ball.”

Pickett finished the day with a modest-looking stat line, going 15/27 for 168 yards and that one touchdown. But his play was far better than the box score indicated and he made several high-level plays throughout. And Pickett’s performance is the clearest sign yet the Steelers picked the right quarterback.

With the win, the Steelers remain in postseason contention and only need a couple of breaks, along with a win over the Cleveland Browns, to punch their ticket into Wild Card weekend.

We’ll have a full breakdown of the game-winning drive in the morning.