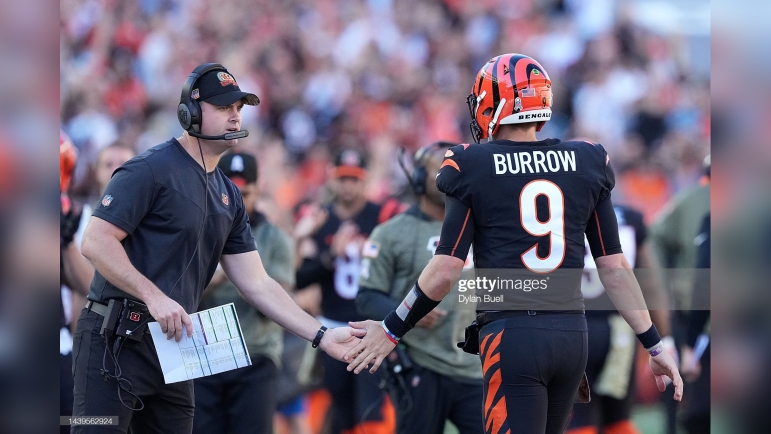 Cincinnati Bengals quarterback Joe Burrow has captured two division titles in the past two years. He took his team to within a minute of winning the Super Bowl last season. Round two begins today as the Bengals host the Baltimore Ravens. But he and the team have a long-term vision in mind. As Burrow said recently, their championship window is “my whole career”.

While he gave essentially the only right answer to that question, it understandably attracted a lot of attention (after all, I wrote about it myself, so I’m not one to talk). He’s been asked about it since, speaking with Maria Taylor for NBC in a 12-minute interview prior to today’s game. This was his answer when asked about the question of the Bengals’ window:

My plan is to be here my whole career, and hopefully [head coach] Zac [Taylor] is here my whole career, and hopefully a lot of our guys are around for as [much] of my career as they can be. I have a lot of confidence in the front office doing their jobs in the offseason. We’ve drafted well, we’ve brought in great free agents, we’ve claimed guys off waivers that’ve really made an impact on our team. I think we have one of the best front offices in the league, and Zac in my opinion is the best head coach in the league, so that gives me a lot of confidence to go out there and say that.

Burrow was drafted with the first-overall pick in the 2020 NFL Draft. The Bengals only had that pick because Taylor’s team was so awful in his first season as head coach the year before, winning only two games. They didn’t do much better in Burrow’s rookie season, going 4-11-1, but he missed the final six games (though they only went 2-6-1 in the nine games he started and finished).

The corner was turned a year later, the drafting of his former college wide receiver, Ja’Marr Chase, in the first round playing a role in that. They’ve now gone 22-11 in the past two seasons (playing only 16 games in 2022 because the week 17 game against the Buffalo Bills was cancelled due to medical emergency).

Taylor still has an all-time 28-36-1 record as head coach of the Bengals over the past four seasons, but one has to think he has a fair chance of getting that up near or over .500 next season. They would need to go 13-4 in order for that to happen to leave him with a 41-40-1 record, but Cincinnati doesn’t look likely to have another losing season in the near future.

If Burrow can help it, their record will remain linked for the foreseeable future and will skyrocket, seeing mutual success along the way. The Bengals last season won their first postseason game since 1990. If they win today it will be the first time in franchise history they win a postseason game in consecutive seasons. They are 8-15 all-time, Taylor currently 3-1.