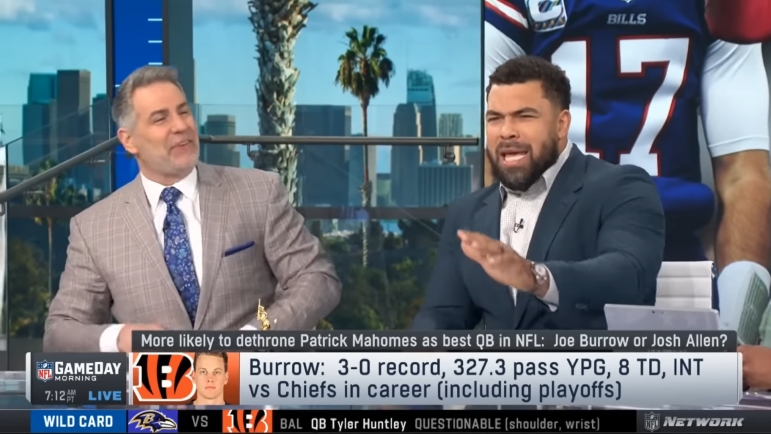 While the Pittsburgh Steelers are already sitting at home having missed out on the postseason, Cameron Heyward has been making the most of his free time by doing the media rounds, appearing on the NFL Network several times.

He hopped on yesterday evening for a segment discussing the power dynamics of the quarterback position in the AFC and who has the best chance of overtaking Kansas City Chiefs quarterback Patrick Mahomes as the biggest threat, debating between the Buffalo Bills’ Josh Allen and the Cincinnati Bengals’ Joe Burrow. Heyward kept it in the North.

“I think Burrow has a chance to dethrone him”, he said on NFL GameDay Live, alongside Emmanuel Sanders, Kurt Warner, and others on the debate. “Pat Mahomes, he’s Batman, and we look at Burrow, he’s the Joker. He makes sure he makes those throws. He’s got all the weapons on his side. He’s got three wide receivers that can go down the field at any time. He’s got Joe Mixon”.

The fact that the Bengals went on to advance last night doesn’t hurt his argument, even if it wasn’t a performance for the ages. Burrow went 23-for-32 passing for 209 yards and one touchdown pass. Cincinnati was outgained by more than 100 yards, but a 98-yard fumble return for a touchdown helped their cause. Still, Heyward was also considering the head-to-head perspective. And the personal.

“You look at what he’s done, he’s 3-0 against Pat Mahomes. So I’m looking forward, Burrow is the guy”, he said. “I’ve got to butter this biscuit. Joe Burrow is the guy. I’ve still got to play this guy, so I’ve got to make sure he’s feeling good about himself. But Burrow’s the guy”.

Allen was drafted seventh in 2018 by the Bills. He has thrown for over 4,000 yards with 35-plus touchdown passes in three consecutive seasons and kept his interceptions to 15 or below during that span. Buffalo has gone 37-12 over the past three years.

Then, of course, there’s Mahomes. Since entering the starting lineup in 2018, he has gone 1,963-for-2,958 passing for 23,957 yards with 192 touchdown passes to 48 interceptions. He has reached the conference finals in each of the past three seasons, making the Super Bowl twice and winning it all in 2019.

Kansas City won the top seed in the AFC this year, granted the lone bye. Both Buffalo and Cincinnati won its first-round games. the Bills will face the Bengals next week while the Chiefs play the Jaguars. Assuming they get past Jacksonville, Burrow and Allen will have to decide who gets a chance to go against Mahomes in the playoffs this year.